Every year, significant milestones are made in the fight against cultural racketeering. From international agreements to repatriations, the Antiquities Coalition celebrates these achievements and looks forward to taking part in future actions to fight the illicit trade of art and artifacts.

Today, the Antiquities Coalition is joining UNESCO and other experts to commemorate the International Day against Illicit Trafficking in Cultural Property. This observance reminds the world that theft, looting, and illicit trafficking of cultural property takes place in every country, robbing people of their culture, identity, and history — and, that we have to work together to combat this crime.

In honor of this annual observance, take a look at five moments from 2022 that impacted the fight to combat looting.

International cooperation is critical in the fight against cultural racketeering as it allows nations to come together and develop proactive policies to keep looted objects from passing through borders and onto the global art market.

🇰🇭As the 2022 ASEAN Chair, Cambodia is using its platform to unite the region in the fight against the looting and trafficking of cultural heritage—a transnational crime that is threatening Southeast Asia’s rich heritage, local communities, and national economies. With support from the Antiquities Coalition, Cambodia has released an ambitious roadmap for tackling the illicit trade in cultural property across ASEAN. Priorities include increased information sharing, strengthened cross-sectoral coordination, and a long-term strategy to address the root causes of the problem. These recommendations were developed during an emergency international conference, which was held from September 5-8 in Siem Reap. The Antiquities Coalition joined the Kingdom’s Ministry of Culture and Fine Arts in recruiting high-level experts to share global best practices during the event.

🏛️On National Museum Day, the Antiquities Coalition joined the China-Europe-America Global Initiative in organizing “The Second Dialogue: Protection of Our Cultural Heritage,” speaking alongside 31 experts from 10 countries. The global dialogue featured international leaders in government, the arts, business, and more in discussions about how we can work together to better safeguard our history.

📃The Antiquities Coalition joined the first cultural ministerial of the EU-Southern partnership alongside European governments, intergovernmental, and non-governmental organizations in Italy to explore how Mediterranean leaders can prioritize the protection of cultural heritage. The Conference of the Ministers of Culture of the Mediterranean ended with the signing of the Naples Declaration, which seeks to protect cultural heritage from disasters and other crisis scenarios while highlighting how culture drives and enables sustainable development. The Antiquities Coalition was honored to be one of the few non-governmental delegations, and the only one from the United States, to sign the communique and speak at the broader event.

A decade-long and ongoing investigation into Douglas Latchford’s network by Homeland Security Investigations and the U.S. Attorney’s Office for the Southern District of New York uncovered thirty looted Cambodian artifacts in the collection of Netscape founder James H. Clark.

In August, the U.S. government repatriated the cultural treasures to the Kingdom of Cambodia, including a monumental sandstone sculpture of Ganesha, the elephant-headed Hindu god. The Ganesha marks the first success of the “Ten Most Wanted Antiquities,” our 2020 awareness campaign to locate and recover some of the world’s most significant looted, stolen, and missing artifacts.

Clark explained why he voluntarily gave up the pieces after learning they were stolen, saying, “my doing this might inspire other people to do the same, but I’m not sure—it’s hard for people to give up something they paid for, but for me, why would you want to own something that was stolen?”

To honor Cambodia’s continued efforts to recover its stolen heritage, the Antiquities Coalition is introducing Uma, the consort of Shiva, as the newest item on the list. Uma was looted from Khmer-Rouge territory and then laundered onto the global art market by Latchford. 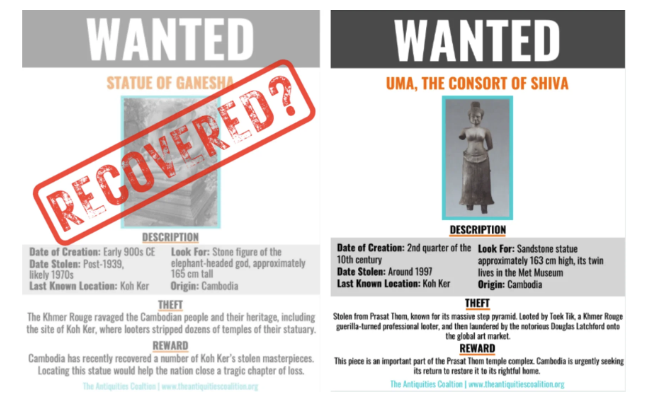 Some of the world’s most prestigious museums are entangled with bad actors in the global art market, and more members of the public are increasingly calling on museums to identify and return looted objects in their walls.

In June, Manhattan District Attorney Alvin Bragg seized 5 Egyptian treasures worth over $3 million from the Metropolitan Museum of Art in New York as part of a police probe that first made headlines in 2019. The probe exposed an international trafficking ring operating out of Egypt and war zones such as Libya, Syria, and Yemen.

“If our foremost museums, with entire departments of lawyers and scholars on staff, cannot ensure their collections are not the products of crime and conflict, then there is a clear and urgent need for stronger legal protections in the art market,” said Deborah Lehr, Founder and Chairman of the Antiquities Coalition.

Museums have a unique opportunity and responsibility to set the legal and ethical standards for all who operate within the wider market. Once known as the gold standard for due diligence and transparency, these museums must take steps to regain public trust.

A New Heritage Platform to Combat Looting in Algeria

The ongoing partnership between the Antiquities Coalition and the Algerian Ministry of Culture, sponsored by the U.S. Embassy in Algiers, is working to preserve and protect the region’s heritage with new tools and digitization solutions. In May, the partnership announced the launch of Turathi, a photographic guide to help identify Algeria’s stolen cultural heritage. 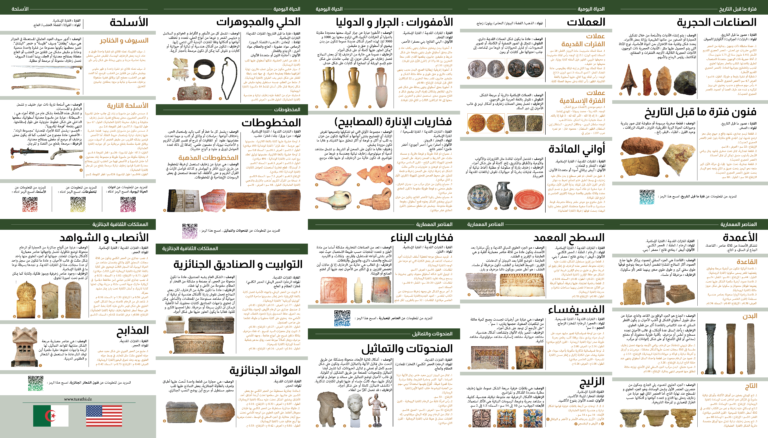 The photo guide and accompanying database are a work tool intended primarily for local customs officers, law enforcement, and international partners involved in the fight against the illicit trafficking of cultural property. However, the guide is available to everyone interested in protecting Algeria’s cultural heritage.

Following a flurry of headlines from the October 2021 Pandora Papers expose, major news outlets continued to feature the illicit antiquities trade in 2022.

Deborah Lehr, Chair and Founder of the Antiquities Coalition, was quoted in a number of news articles throughout the year, placing the Antiquities Coalition at the forefront of organizations working to end the illicit antiquities trade. Lehr’s op-ed for Artnet details how the U.S. art market can ensure Russia does not evade sanctions to finance the Ukraine invasion. Smithsonian Magazine, The National News, and Euronews also featured Lehr’s experienced point of view when detailing various examples of this illegal market.

Tess Davis, Executive Director of the Antiquities Coalition, was quoted in the New York Times and Bloomberg Businessweek on the subject and even made a cameo alongside John Oliver. The Last Week Tonight segment detailed examples of museums and collectors participating in this illicit trade and why it continues to thrive today.

Oliver shared examples of illicit antiquities at the British Museum before diving into provenance research. Davis provided insights on one incident where Sotheby’s auction house ignored warning signs of a looted Cambodian antiquity and put the statue on the front of one of their more prominent auction catalogs of the year. The segment has garnered millions of views on YouTube, helping to raise awareness of cultural racketeering and why we must combat looting.

The Antiquities Coalition thanks its partners, governments, law enforcement, the public, and more for their critical role in the fight against the illicit trade of antiquities. Learn more about the International Day against Illicit Trafficking in Cultural Property on UNESCO’s website.