NEW YORK, (August 8, 2022) – Today, the United States government repatriated thirty cultural treasures worth tens of millions of dollars to the Kingdom of Cambodia, including a monumental sandstone sculpture of Ganesha, the elephant-headed Hindu god. The return of the Ganesha to its rightful home in Cambodia marks the first success of the “Ten Most Wanted Antiquities,” the Antiquities Coalition’s 2020 awareness campaign to locate and recover some of the world’s most significant looted, stolen, and missing artifacts.

All 30 pieces had been sold to American collectors by Douglas Latchford—the now disgraced “adventurer scholar,” who made headlines in last year’s Pandora Papers for smuggling blood antiquities from Cambodian war zones and then hiding his millions of dollars in profits through the misuse of tax havens, trusts, and offshore accounts. The pieces were seized as part of a decade-long, and still ongoing, investigation into Latchford’s network by Homeland Security Investigations and the U.S. Attorney’s Office for the Southern District of New York.

The Ganesha was recovered from the collection of Netscape founder James H. Clark, who surrendered a total of 35 antiquities after learning from investigators that all of the pieces were stolen. In an interview with the New York Times, Clark detailed his business relationship with Latchford and why he felt obligated to return the stolen items voluntarily, saying, “my doing this might inspire other people to do the same, but I’m not sure — it’s hard for people to give up something they paid for, but for me, why would you want to own something that was stolen?” 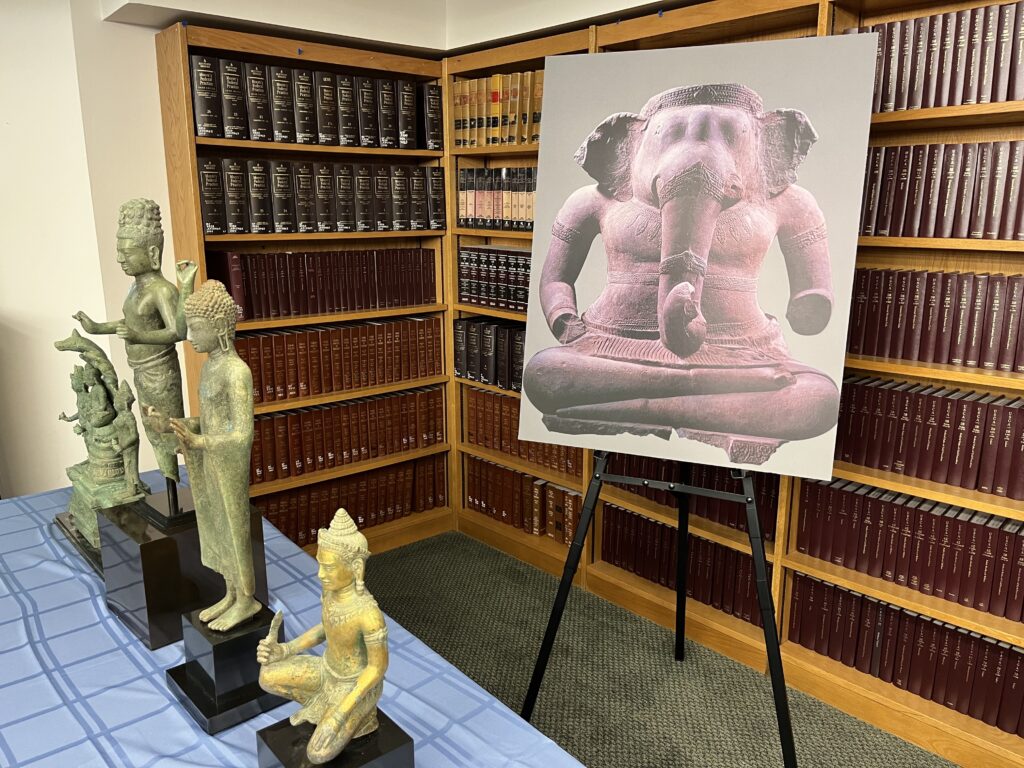 Both the Ganesha and another of the masterpieces returned, the Skanda on a Peacock, hailed from Koh Ker, the capital of the ancient Khmer Empire from 928 to 944 C.E. Ancient Koh Ker statuary was revolutionary for its time given the size, dynamic positions, unique decorative features, and sacred ancestral representation of the art pieces.

“We launched the Ten Most Wanted Antiquities list to shine a spotlight on cultural treasures from around the world that have been lost to crime and war,” said Deborah Lehr, chairman and founder of the Antiquities Coalition. “We’re thrilled that the Ganesha, as well as the Skanda on a Peacock and so many other pieces, are now being returned home to the people of Cambodia. This success demonstrates what wonderful things we can accomplish when governments, law enforcement, advocates, and responsible leaders in the art market work together.”

While the first of the original “Top Ten Most Wanted Antiquities” has been recovered, nine remain missing, along with countless other objects stolen from their home by thieves capitalizing on the chaos of war, unrest, or other crisis. These crimes leave a wound that persists for decades or even centuries. In recognition of the work that remains to combat cultural racketeering, the Antiquities Coalition will soon launch an updated most wanted list featuring a new missing masterpiece from Cambodia.

View the nine missing pieces and  learn more about the Top Ten here.