We petition our policymakers—from government officials to intergovernmental institutions—to fight cultural racketeering around the world.

We champion better law and policy to key decision makers in government and the market, successfully advocating for practical and proven solutions. We do this by helping governments, law enforcement agencies, the private sector, and other decision makers better understand the challenges facing our heritage, while offering solutions to protect it.

HOW WE ARE MAKING AN IMPACT 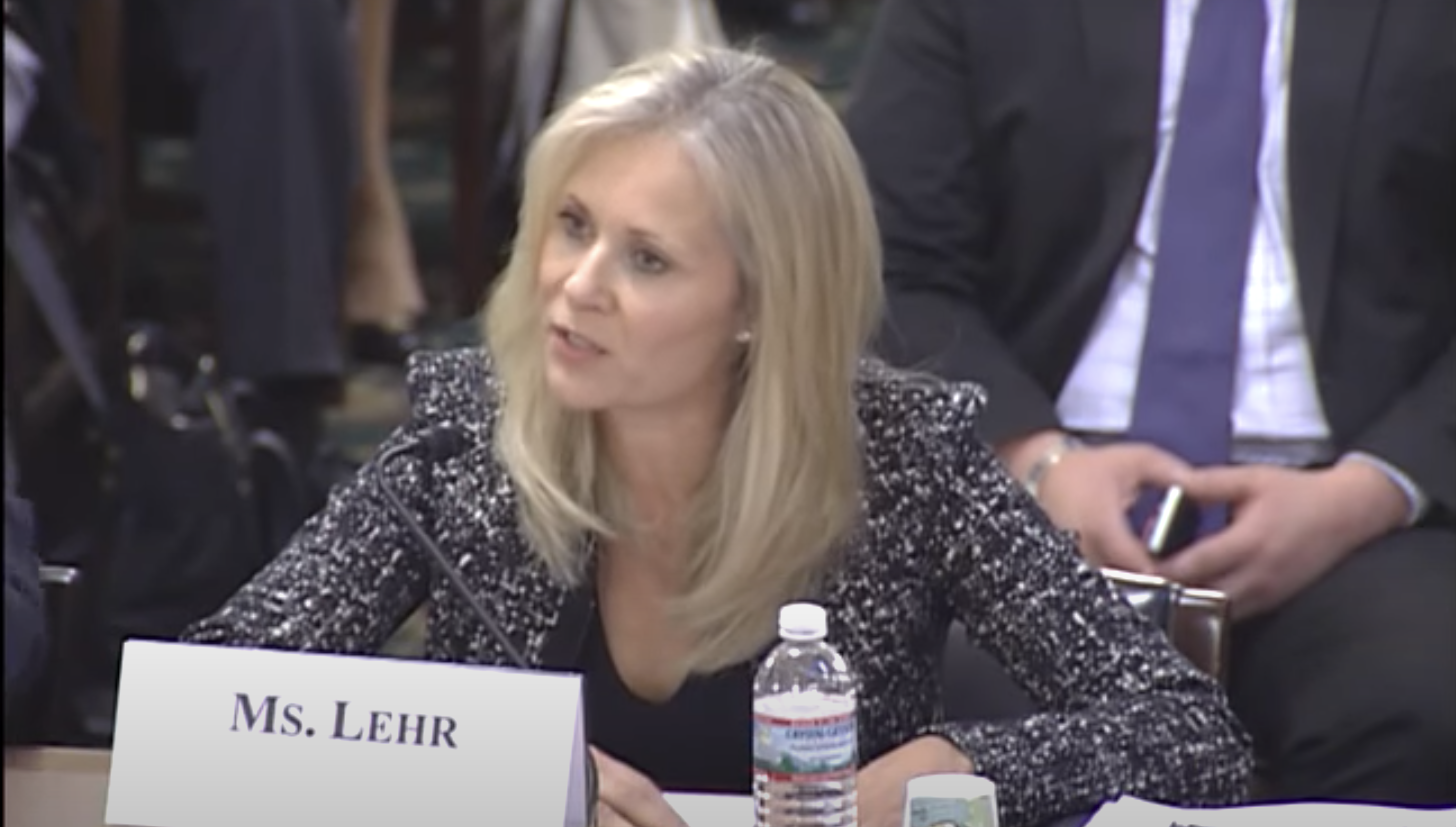 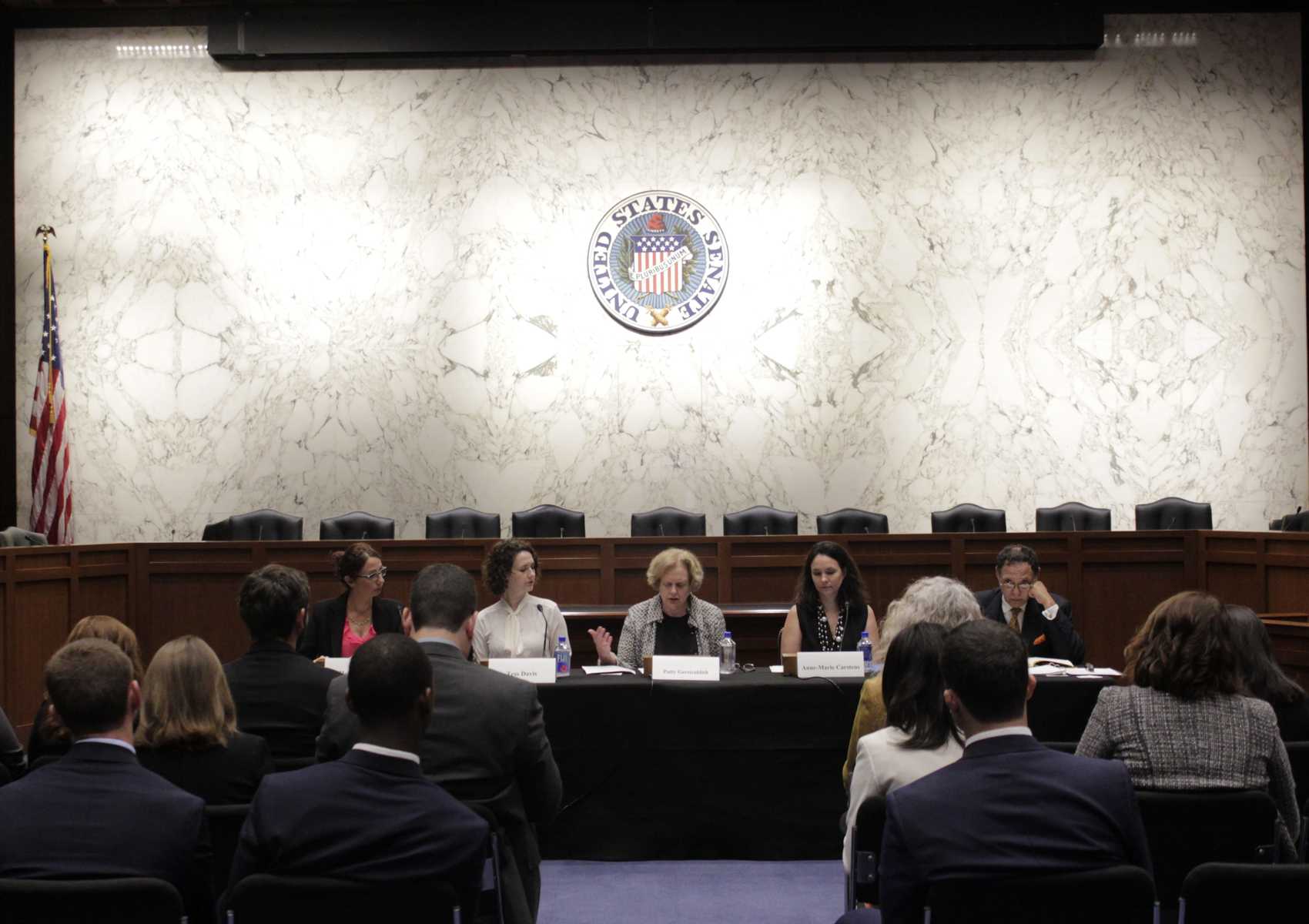 2016 Panel: Destruction of Cultural Heritage in Conflict-Promoting Accountability and the Rule of Law

On September 22, 2016 Antiquities Coalition executive director Tess Davis joined a panel for the Senate Human Rights Caucus and the Tom Lantos Human Rights Commission. The panel, titled Destruction of Cultural Heritage in Conflict: Promoting Accountability and the Rule of Law explored the deliberate destruction of cultural heritage as a crime of war and tool of genocide.

The destruction of cultural heritage in conflict is an increasingly pressing concern for governments and civil society around the world. In Iraq and Syria, Daesh (also known as ISIS) has targeted and destroyed, in visible and dramatic fashion, structures associated with minority sects ofIslam, Christianity, and ancient and traditional cultures. In Mali, a rebel group affiliated with al-Qaeda in the Islamic Maghreb attacked and destroyed religious sites in the famed city of Timbuktu – and one of the perpetrators of these crimes has pled guilty to the war crime of cultural heritage destruction at the International Criminal Court.

View the Interactive Before and After Images of Destruction

2016 Briefing: Following the Money-Examining Current Terrorist Financing Trends and the Threat to the Homeland

On May 12, 2016 Antiquities Coalition chairman and founder Deborah Lehr testified before the Subcommittee on Counterterrorism and Intelligence of the House Committee on Homeland Security. The hearing, titled “Following the Money: Examining Current Terrorist Financing Trends and the Threat to the Homeland” explored the developing trends in illicit financial activity that may be used to support terrorist plots and operations against the United States. It focused on terrorist financing through criminal activity, charity fraud, and antiquities smuggling. Representative Peter King (R-New York’s 2nd District), Chairman of the Subcommittee, and Ranking Member Brian Higgins (D-New York’s 27th District) led the hearing.

“Culture has become a weapon of war and a fundraising tool for violent extremist organizations across the Middle East and Northern Africa,” said Lehr. “The problem is widespread across the MENA region. Many of the attacks on heritage are targeted at its economy, which is reliant on cultural tourism. A slowing economy threatens political stability, a point not lost on ISIL.”

Read our Blog on the Hearing 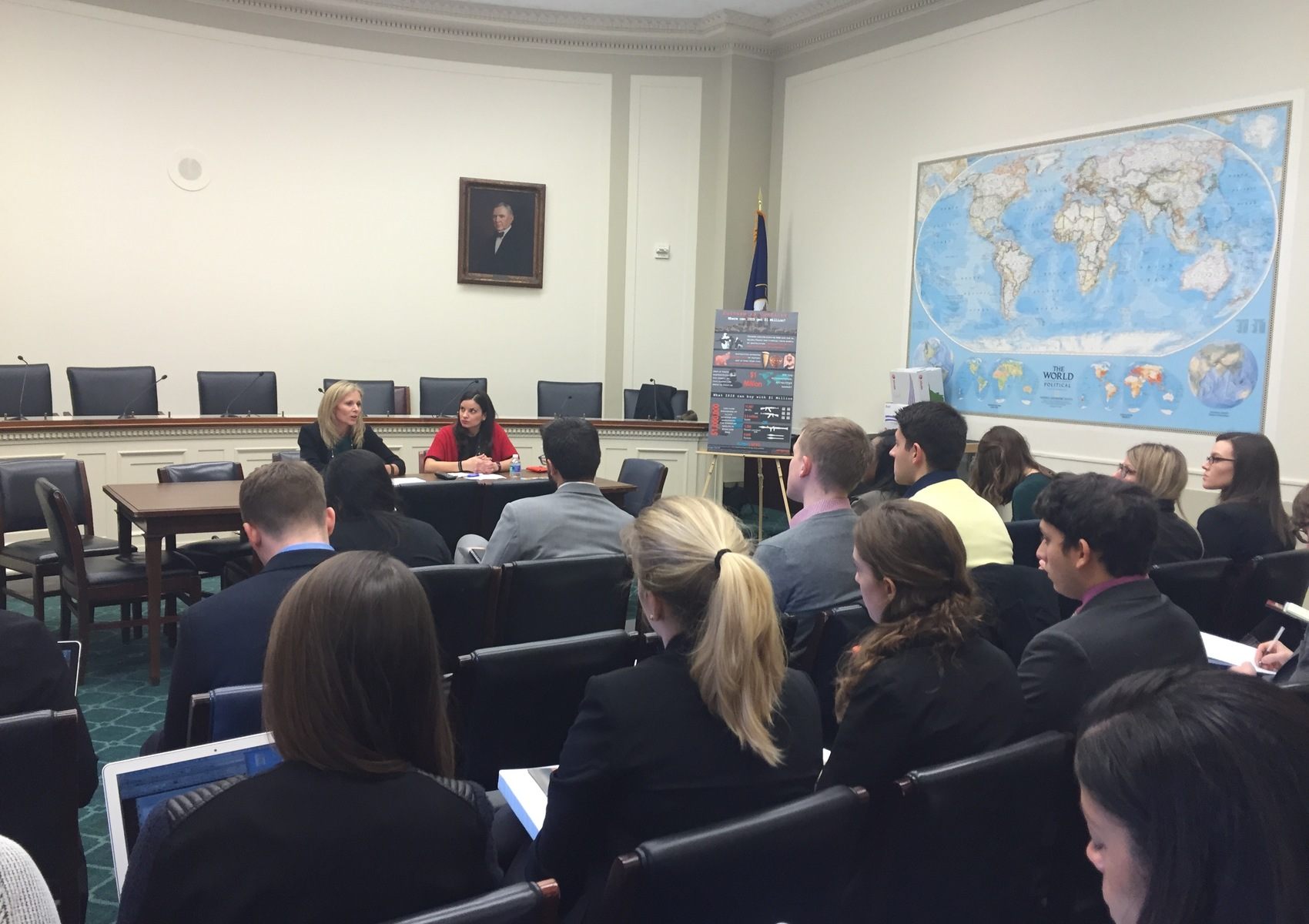 On February 12, 2016 Antiquities Coalition chairman and founder Deborah Lehr and chief of staff Katie A. Paul presented the #CultureUnderThreat Map to Congressional staff on the Hill. The map shows not only the extent of cultural crimes but also the intensity.

The discussion explored how cultural heritage is used by Daesh and other violent extremist organizations as a means of growing their campaigns of terror and expanding their networks. Lehr and Paul discussed the bipartisan steps Congress is taking to curb funding by cracking down on the trafficking of artifacts looted from sites in Syria.

Interact with the #CultureUnderThreat Maps

In April of 2021, the Antiquities Coalition joined a diverse group of experts, including practicing attorneys, law professors and scholars, archaeologists, and other professionals with extensive expertise and experience in cultural heritage law in submitting comments to the ICC’s Office of the Prosecutor’s Draft Policy on Cultural Heritage.

In summary, the Comments emphasized the importance of the OTP’s Draft Policy on Cultural Heritage given the lack of global consensus around priorities, practices, and policies for investigating and prosecuting cultural heritage crimes. The Comment addressed the scope of the Draft Policy and called on the OTP to provide concrete examples within its Policy that demonstrate the broad nature of cultural heritage and crimes that may target it, and better illustrate the full scope of the global problem. They supported the OTP taking a comprehensive and expansive view of the terms ‘cultural heritage’ and ‘cultural property’, including natural and intangible heritage, but noted that the Draft Policy’s current definition may unintentionally exclude certain types of cultural heritage.

In March of 2015, the Antiquities Coalition wrote Fatou Bensouda, prosecutor of the International Criminal Court (ICC), urging her to open an investigation into Daesh’s war crimes against cultural heritage in northern Iraq.

The targeting and deliberate destruction of cultural heritage is a grave violation of international law, including the Rome Statute, which established the ICC. More importantly, judging from history, it also poses a stark warning that violent extremist organizations like Daesh will soon undertake even greater violence against the besieged Iraqi population: The United Nations (UN) clearly recognizes that such “cultural cleansing” is a specific risk factor of impending genocide, crimes against humanity and war crimes.

The Antiquities Coalition strongly commends and supports the International Criminal Court’s (ICC) decision to prosecute Ahmad Al-Mahdi Al Faqi, a member of the al Qaeda-affiliated Ansar Dine in Mali, for war crimes — in the first case brought before the ICC on the destruction of cultural property. This landmark decision sends a strong message that the intentional destruction of our shared heritage will not be tolerated and that those who engage in these crimes will be held accountable for their actions.

Read Our Blog on the ICC Letter

Read Our Letter to the ICC Prosecutor

Read the ICC’s Response to our Letter 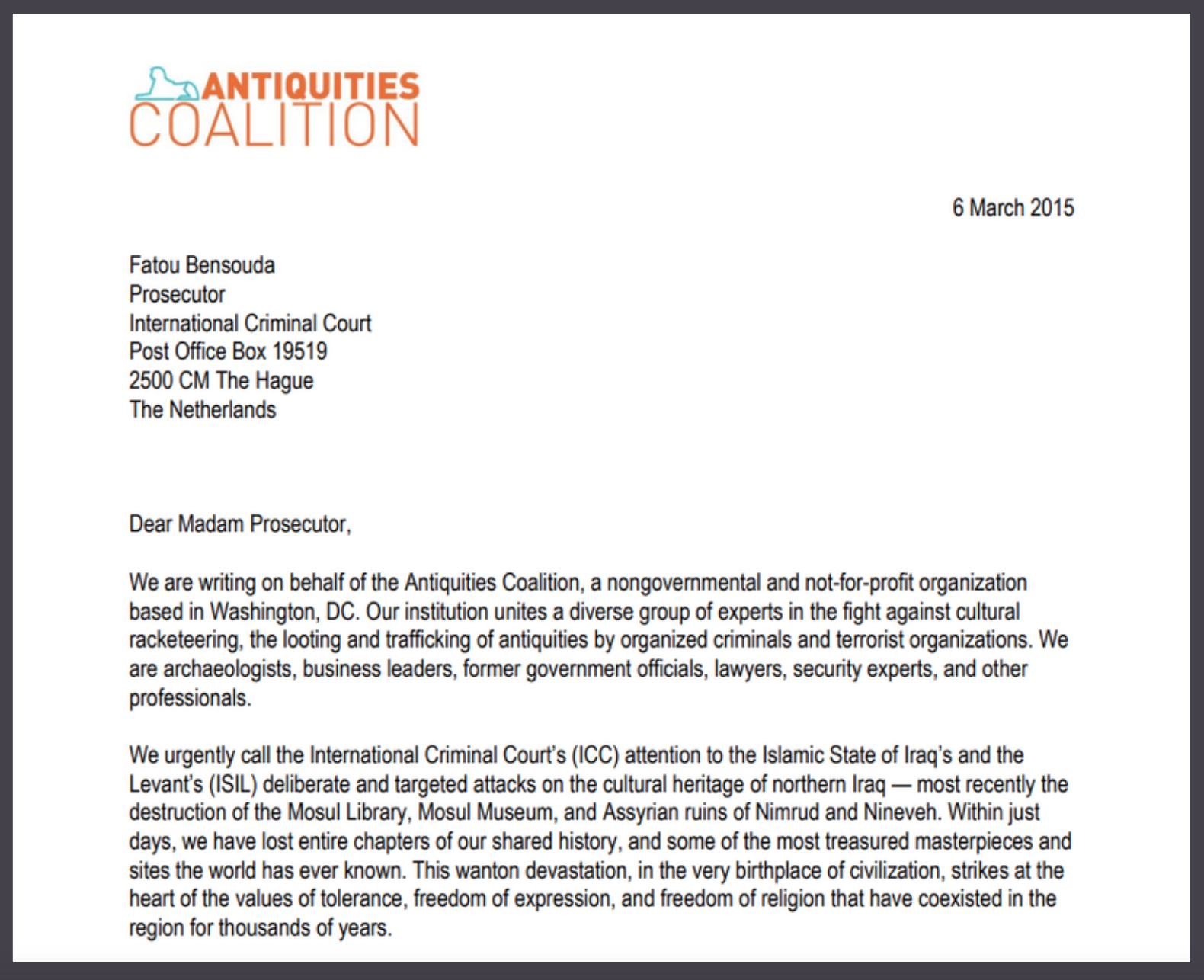 2021 Presentation:  Protection of Cultural Heritage and the Prevention of Illicit Trafficking

In April of 2021, Deborah Lehr, Founder and Chairman of the Antiquities Coalition, joined leaders from government, law enforcement, and civil society in the Group of 20’s (G20) first public program tackling the cultural racketeering crisis.

The April 9 webinar, Protection of Cultural Heritage and the Prevention of Illicit Trafficking, opened a series of virtual events that will lead up to a planned in-person convening of Cultural Ministers from all G20 member states later this year. The Antiquities Coalition was honored to be one of the few non-governmental organizations invited to share its expertise on this important topic along with distinguished individuals and institutions from around the world.

Read Our Blog on the Webinar 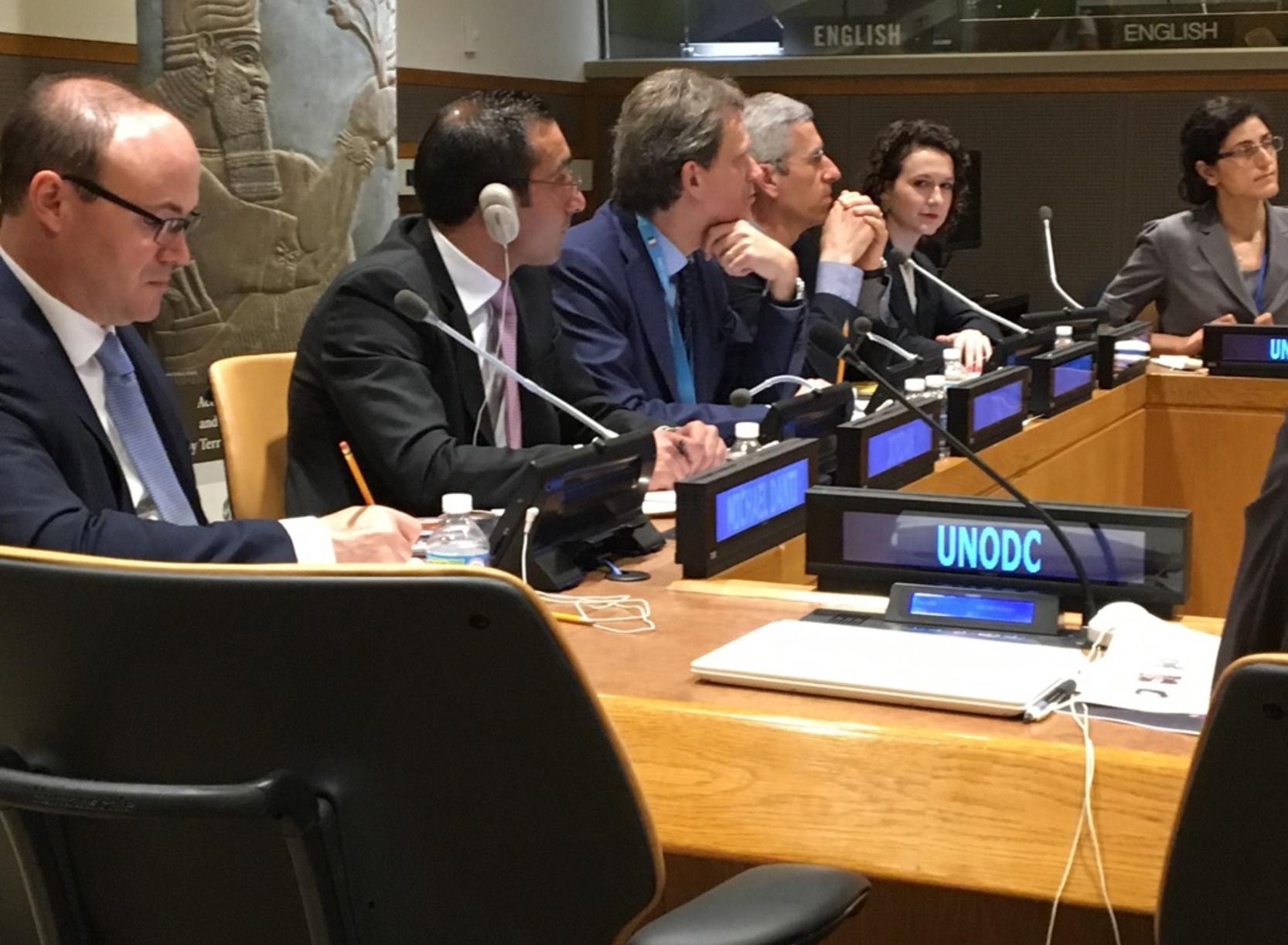 The Permanent Delegations of Jordan and Italy, together with INTERPOL, UNESCO and the UN Office on Drugs and Crime (UNODC) organize a third and final Expert Meeting of the series on “Protecting Cultural Heritage – an Imperative for Humanity”, held on May 27, 2016 at the United Nations Headquarters. This meeting focused on the situation of trafficking from “source” countries as well as on the broader issue of cultural heritage destruction. Tess Davis, Executive Director of the Antiquities Coalition, was one of the featured speakers, which also included representatives of United Nations Member States, intergovernmental organizations, museums, universities, and other nongovernmental organizations.

Davis urged those present to remember that despite the severity of the danger posed by Daesh (also known as ISIS), the current threat to our world heritage goes far beyond Iraq and Syria, and far beyond the Middle East and North Africa. She urged the Member States present, especially those representing demand countries, to immediately close their border to conflict antiquities, to include cultural heritage in any peacekeeping mandate, and to criminally prosecute crimes against culture along with other atrocity crimes.

Read our Blog on the UN meeting