The global issue of cultural racketeering is becoming increasingly well known among the general public as stories of looted antiquities continue to make national headlines. Some of the world’s most prestigious museums, including the Metropolitan Museum of Art in New York and the Louvre Museum in Paris, have been caught up in a flurry of scandals for collecting and displaying stolen art within their walls.

Last Week Tonight host John Oliver tackled the issue during the show’s October 2 episode, detailing examples of museums and collectors participating in this illicit trade and why it continues to thrive today. He explores the history of the British Museum and emphasizes that most museums only display a tiny fraction of their full collections. In the case of the British Museum, they publicly display 80,000 of their 8 million objects, which accounts for just 1%.

Davis provided insights on the incident and Sotheby’s final decision to display the antiquity on the cover of one of its most popular publications:

“Three years ago, Cambodia learned that Sotheby’s auction house in Manhattan was attempting to sell a thousand-year-old masterpiece for $3 million, the feet of which were still at the temple in Cambodia,” said Davis. “Sotheby’s was warned by the very expert they hired to appraise the statue that it was ‘definitely stolen.’ They knew the feet were still there. Despite what their expert told them, they decided to put the statue on the front of one of their more prominent auction catalogs of the year.“ 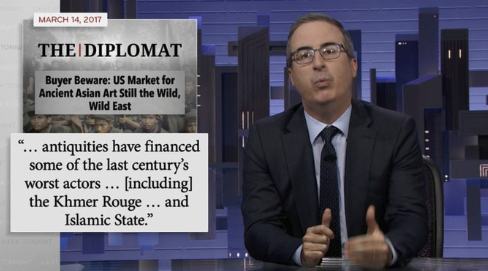 Oliver notes that it is not uncommon to see statues without hands or feet, and while many may assume it comes from damage over time, it is often a sign that the statue is stolen. A 2017 op-ed, authored by the Antiquities Coalition, was also quoted to emphasize that cultural racketeering is not a white-collar, victimless crime. The illicit trade of art and antiquities has funded some of the world’s worst actors, from the Khmer Rouge in Cambodia to the Islamic State in Iraq and Syria.

The episode wrapped up with a skit featuring comedian Kumail Nanjiani, who takes viewers through the Payback Museum, the first museum in the world dedicated to providing recourse to nations plundered of their greatest treasures throughout history. The skit showcases the looting of Western masterpieces such as Stonehenge and the Liberty Bell to drive home the disconnect other countries experience when significant pieces of history are missing and curators have no desire to return them to their rightful owners. Make sure to follow the Payback Museum on Twitter.

The Antiquities Coalition thanks John Oliver and the team at Last Week Tonight for using their platform to raise awareness of cultural racketeering and why we must combat looting. Watch the full segment here.