Siem Reap, September 5, 2022 — The Antiquities Coalition is excited to announce a new addition to its “Ten Most Wanted” list, an illustrated guide to cultural treasures from around the world that have been looted or stolen and are still missing. The update follows the awareness campaign’s first success, the recovery and return of a monumental 10th Century sculpture of the elephant-headed god Ganesha. U.S. authorities repatriated the piece to Cambodia on August 8 in New York City.

To honor Cambodia’s continued efforts to recover its stolen heritage, the Antiquities Coalition is introducing Uma, the consort of Shiva, as the newest item on the list. Uma was looted from Khmer-Rouge territory and then laundered onto the global art market by the notorious trafficker Douglas Latchford. The now disgraced “adventurer scholar,” who also trafficked the Ganesha, made headlines in last year’s Pandora Papers for smuggling blood antiquities from Cambodian war zones and then hiding his millions of dollars in profits through the misuse of tax havens, trusts, and offshore accounts.

Bradley J. Gordon, an American attorney for the Cambodian Ministry of Culture and Fine Arts, is leading a team of experts tasked with bringing Khmer antiquities home. Gordon describes how Uma was looted and why it should be returned to the Kingdom:

“Two years ago, the head of a looting gang, Lion, recounted to our team in Cambodia about removing two females from the Prasat Thom complex at Koh Ker in 1997. Jungle Cat, the head of a smaller gang, removed a male from the same location.”

Last year, a team of Cambodian archeologists discovered the pedestal of three statues on site, which they believe belong to the two females and one male. They also discovered a foot which archeologists believe matches one of the females—a statue now on view at the Metropolitan Museum of Art in New York. The current location of Uma, the twin of the female statue at the Met, is unknown.

“The other female we are now searching the world for appears in Latchford’s book ‘Adoration and Glory’ according to testimony from Lion. The Cambodians are waiting for all three statues to return home” said Gordon.

Following the successful efforts by Cambodia to locate and return its cultural treasures, including the Ganesha, there is hope that artifacts like Uma will also be returned.

“We’re ecstatic that the Ganesha, one of the Ten Most Wanted Antiquities, is returning to its rightful home, but numerous artifacts remain missing,” said Deborah Lehr, Chair and Founder of the Antiquities Coalition. “Our updated campaign introduces a new Cambodian masterpiece and encourages the public to help us return this heritage. We look forward to continuing to raise awareness of cultural racketeering and collaborating with governments, advocates, and responsible leaders in the art market to combat looting.”

The release of the updated list coincides with an international conference in Siem Reap, hosted by the Royal Government of Cambodia and the Antiquities Coalition, gathering government officials and top experts from around the world to develop concrete solutions to safeguard the region’s past for future generations. The event also serves as an International Plenum and meeting of culture ministers from the Association of Southeast Asian Nations (ASEAN) to foster greater collaboration and understanding among member states.

The new “Ten Most Wanted Antiquities” now features the following artifacts from Cambodia, China, Egypt, Ethiopia, Guatemala, India, Iraq, the United States, and Yemen. The list, chosen in cooperation with top specialists, is accompanied by posters of each object to provide snapshots of the pieces’ significance, their theft, and their last known whereabouts.

While this list highlights ten missing pieces of heritage, much of the world’s shared history remains in danger. While Cambodia is recovering blood antiquities, conflicts around the world, such as that in Ukraine, ensure that these crimes are still taking place. Periods of unrest heighten the risk that bad actors will exploit vulnerabilities in the art market to fund this illicit trade.

Any information leading to the possible recovery of these items should be submitted to law enforcement using the tip lines below:

The Antiquities Coalition unites a diverse group of experts in the fight against cultural racketeering: the illicit trade in antiquities by organized criminals and terrorist organizations. This plunder for profit funds crime and conflict around the world—erasing our past and threatening our future. The Coalition’s innovative and practical solutions tackle crimes against heritage head on, empowering communities and countries in crisis. Learn more at theantiquitiescoalition.org. 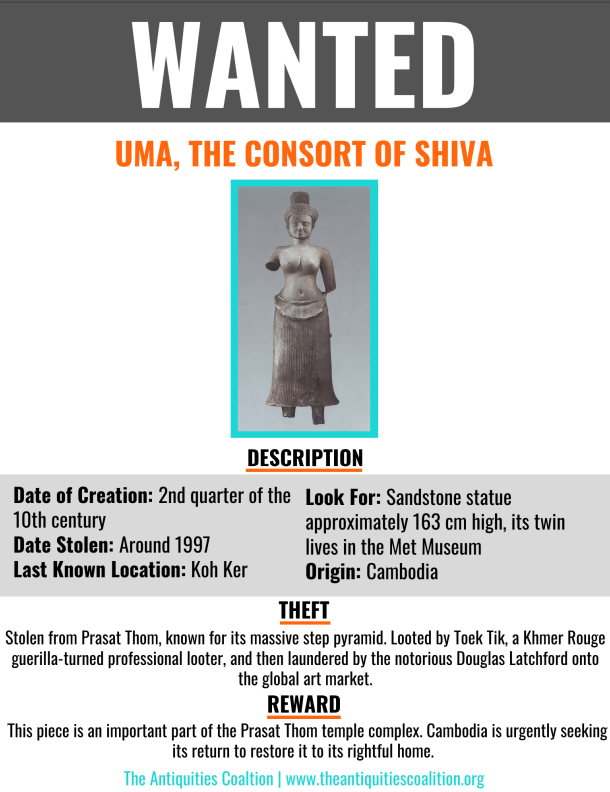