Washington, January 11, 2022: This week, the United States government filed suit to recover tens of millions of dollars worth of illicit artifacts which criminals had plundered from ancient and sacred sites across Southeast Asia and then laundered onto the American art market, where they ended up in the collection of Netscape founder James H. Clark.

In doing so, U.S. investigators and prosecutors may have also solved a decades-long archeological mystery: experts believe the seizure includes a 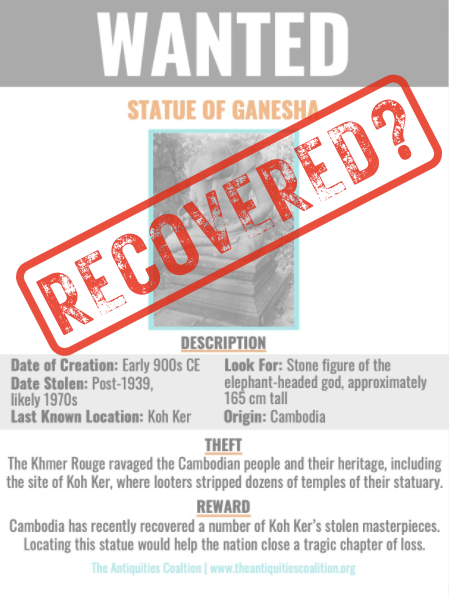 1000-year-old masterpiece that ranks among the world’s “Ten Most Wanted Antiquities,” a list launched in 2020 by the Antiquities Coalition to help find some of the top looted, stolen, and missing cultural treasures from around the globe.

This “Top Ten” shone a spotlight on a monumental sandstone sculpture of Ganesha, the elephant-headed Hindu god, who had once graced the 10th century Cambodian capital of Koh Ker. Standing five feet tall, it was photographed at the site in the 1930s, but then vanished during the country’s many years of civil war and genocide. A near identical twin emerged in a temporary exhibition at Berlin’s Asian Art Museum in 2004, prompting leading art historians and archeologists to sound alarms that the pieces were one and the same, only slightly modified to describe its illegal origins. Following the controversy, the “Berlin” Ganesha then disappeared itself, only resurfacing this week as one of the 35 objects targeted by U.S. authorities.

According to court filings, this Ganesha and the dozens of other pieces Clark voluntarily forfeited were tied to Douglas Latchford—the “adventurer scholar” who made front page headlines in last year’s Pandora Papers for smuggling blood antiquities from Cambodian war zones, and then hiding his millions of dollars in profits through the misuse of tax havens, trusts, and offshore accounts.

“The Antiquities Coalition commends the U.S. government for ensuring that Douglas Latchford’s death in 2020 did not end the quest to bring him and his co-conspirators to justice,” said Deborah Lehr, Chair and Founder of the Antiquities Coalition. “For a half century, Latchford plundered the rich heritage of the Cambodian people, crimes that we now know helped to fund the Civil War and Killing Fields. He also defrauded countless American collectors, including Mr. Clark. We are grateful for his cooperation and hope that this example inspires others to do the right thing, so more of the world’s top ten missing antiquities can return home.”

If this Ganesha is indeed the one photographed at Koh Ker in the 1930s, it will mark the first success from the Ten Most Wanted Antiquities list, an illustrated guide to artifacts from around the world that have been looted or stolen—and are still missing. The list is accompanied by posters of each object, published on the Antiquities Coalition’s website, which provide snapshots of the pieces’ significance, their theft, and their last known whereabouts. Any information leading to their possible recovery should be submitted to law enforcement using the included tip lines.