THE FUTURE OF EGYPT’S PAST

THE FUTURE OF EGYPT’S PAST

In January 2011, as the revolutionary fires raged in Cairo’s Tahrir square, Egypt’s long-serving head of the Supreme Council of Antiquities, Dr. Zahi Hawass, became concerned about the fate of Egypt’s antiquities. Familiar to US television audiences through his appearances on the Discovery and National Geographic channels, Dr. Hawass is an archaeologist in his own right who recognized that saving Egypt’s rich patrimony from looters was central to the nation’s future as a major tourist destination, as well as to the world. In late January and early February, he determined that several items had already been stolen during the looting of the National Museum, thefts that were widely reported in the news media to hinder their sale on the black market. The revolutionaries were equally concerned – and a cordon of protestors risked their lives surrounding the museum to try to prevent further looting and destruction. Less well-known and more dire, perhaps, has been the looting of sites that followed the breakdown in government control. The following interview with Professor Eric Cline, director, and Deborah Lehr, chairman, of the newly-formed Capitol Archaeological Institute (CAI) at George Washington University, (which Hawass had helped to inaugurate in October 2010) documents some of the Institute’s efforts to bring the looting to the world’s attention and search for a solution.

How and when did you realize that this looting was going on?

Eric: We started hearing reports of looting right after the Revolution started. Professor Selima Ikram at the American University in Cairo reported the story that site looting was going on, and the Archaeological Institute of America had issued a press release deploring the looting.

Deborah: After seeing the Egyptian people stand up to protect the Cairo Museum against the looters, we believed our Institute, whose mission is to view archaeology as a tool of diplomacy, needed to take action. Our first step was to review what actions the US Government could take to help stop the looting and, at least, to prevent illicit antiquities from being sold in the US market.

In March we issued a Call To Action. We recruited colleagues and interested parties from all over the world to join an “International Coalition to Support Protection of Egyptian Antiquities.” The call to action requested the President and Congress to take certain steps to protect against the import of illicit antiquities from Egypt. We issued the Statement on a Friday night and by Monday morning we had 77 signatures.

Eric: Actually the first signature was less than one minute after we posted the initial request. Eventually we got 400 more signatures, but forwarded the proposal to the White House and State Department with the original 77, as well as to the Congress; we followed up with visits to multiple officials in the Administration. But we needed more than just actions by the US government; we needed to help Egypt develop a plan. By this time, there was a new government and Dr. Zahi Hawass was out. We needed to make our case that we were here to help.

Deborah: Signatories represented professional societies from the academic, museum, and tourist worlds; tourism organizations; museums; literary figures such as Elizabeth Peters; and professors from universities across the globe including Salima Ikram, American University in Cairo, and Betsy Bryan, Johns Hopkins University, (both are authors in this issue of AnthroNotse). Some prominent signatories included heads, presidents, and section heads from, for example, the National Geographic Society, Archaeological Institute of America (AIA), American Schools of Oriental Research (ASOR), the Oriental Institute at the University of Chicago, the Society for Archaeological Science, The Metropolitan Museum, the Brooklyn Museum, the Boston Museum of Fine Arts, the Australian Archaeological Association, the Society for American Archaeology, the World Archaeological Congress, the German Archaeological Institute, the American Society of Travel Agents, and more than 25 universities. 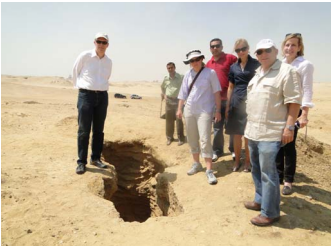 Deborah: We realized that this was not enough. With several of our core group having served in government, we decided to develop a “white paper” that would outline steps that could be taken to better protect the antiquities in Egypt. We created an “ International Coalition to Support Protection of Egyptian Antiquities.” The AIA, ASOR and National Geographic were early supporters. Eric: The white paper outlined a series of steps, including documenting the problem, requesting emergency import restriction on imports of Egyptian antiquities, providing training and funding to increase the policing of Egypt’s archaeological sites, and providing training and technological support to increase inspection of archaeological sites and regions. In the longer term, the coalition proposed creating and maintaining a database, in English and Arabic, of Egypt’s archaeological sites. The paper also proposed launching an international educational campaign to protect the region’s antiquities, fostering the creation of small businesses tied to cultural tourism, a training program for state antiquities inspectors, and even an effort to promote “green” tourism in conjunction with Egyptian sites.

Deborah: To obtain proof that the looting was indeed occurring, we obtained satellite imagery of the key tourist sites in Egypt, from before the revolution, right after the revolution, and in May 2011. The company GeoEye very generously worked with us to provide the imagery.

Eric: We invited Professor Sarah Parcak, an Egyptologist at the University of Alabama, Birmingham, to analyze the imagery for us. She is known as the “Space Archaeologist” for her use of satellite photography to find and study sites. She possessed some analysis from before the revolution and was able to compare it to the latest imagery. Her analysis showed significant looting at Abusir and Saqqara. We shared this analysis, along with the white paper, with the Egyptian Embassy here in Washington.

How did the Egyptian Government react?

Deborah: As a result of our presentation and the white paper, the Egyptian Government invited us to Cairo to discuss how our Coalition might support their efforts during this difficult time. They realized, as we did, that this issue of looting was not just harming their cultural heritage but hitting at their most important industry – Tourism. So there is a key economic component to our recommendations as well as to their interest in our assistance. Eric: In May 2011, we headed to Cairo for negotiations with the Egyptian Government. Our delegation included Deborah and myself; Peter Herdrich, the CEO of the Archaeological Institute of America; Claire Buchan, former Deputy Press Secretary for the White House and Chief of Staff at the Commerce Department (who handled public relations and congressional outreach for the Initiative); and Ted Greenberg, a former senior official at the US Department of Justice, who was a leading expert on money laundering.

Deborah: It was a fascinating time to be there. The trip was not easy: There were still protesters in Tahrir Square, and the key government meetings were surrounded by tanks and anti-personnel carriers. The Egyptian Foreign Ministry hosted an interagency meeting with all the key government ministries involved in any aspect of protecting cultural heritage sites. As a result of these negotiations, we agreed upon a public-private partnership with the Egyptian Government covering immediate, long-term, and short-term goals.

Eric: In addition to presenting the satellite imagery to the key government ministers, some of whom were incredibly moved by the imagery of the destruction, we also did some ground-truthing – matching the satellite photos to actual pictures of looting pits.

Deborah: We are waiting for the new President of Egypt to be elected before taking the next step. All indications are that the government wishes to proceed with implementing this agreement to help protect these important sites.

Eric: In the meantime, we stand ready to help. We contine to work closely with the Egyptian Embassy, which has been supportive of our Coalition’s efforts. We have also continued to work to raise the profile within the United States of the issues of continued looting around the world. The template that we developed for Egypt is also applicable to any country in crisis. Our concern is that with government transitions occurring across the Middle East, looting has increased in many countries. It is our goal to work with many of these governments to protect these precious antiquities as well as preserve their economic well being.

Dr. Zahi Hawass, reinstated in May, wrote the following account of the May meeting but was out of government again by June. I am very happy to see how much the rest of the world cares about Egyptian heritage. It means a great deal to the people of Egypt as well as to me personally that other nations are willing to offer their support. What those brave people who protected the Egyptian Museum in Tahrir Square on January 28 did caught the attention of the world’s media. It brought renewed respect to our country, and we all take our hats off to them for the pride they brought to us. It is a tribute to them that the international community now recognizes how deeply the Egyptian people wish to safeguard their antiquities, so thank you to everyone who is trying to help. Excitingly, many of the Coalition’s proposals will mean that lots of young Egyptians will have new employment opportunities at the Ministry of State for Antiquities. 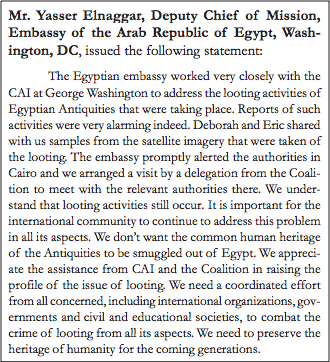