In April 2003, looters broke into the National Museum of Iraq, stealing and destroying nearly 15,000 objects, of which only an approximate one-third have been recovered. Iraq’s cultural heritage continues to suffer looting and damage throughout conflict and beyond, exposing significant gaps in and prompting reevaluation of U.S. and international cultural heritage protection efforts from all sectors, including law, policy, academia, government, military, and the public. 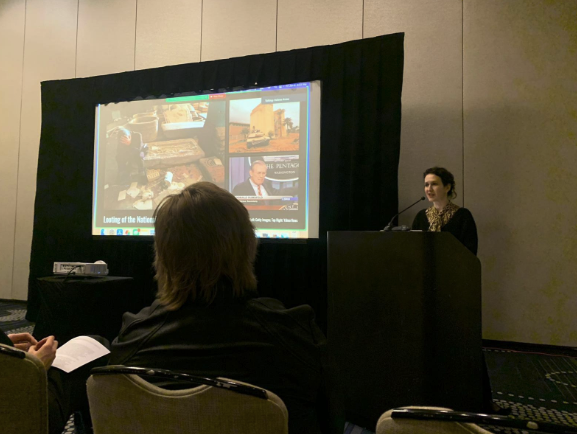 Arose and Davis organized the session Cultural Heritage Protection After Iraq: Advances And Developments Over The Past 20 Years, where both spoke alongside other cultural heritage protection and preservation experts, including:

Davis detailed the Antiquities Coalition’s partnerships with the State Department, ministries of foreign affairs, defense, intelligence, and law enforcement communities and what is still needed in international policy to effectively mitigate the illicit trade of art and antiquities.

The looting of Iraq’s National Museum marked the beginning of widespread pillage at archaeological sites across the country by everyone from opportunistic criminals to terrorist groups like Al Qaeda. This event changed the global conversation on cultural racketeering, raising awareness among the general public and policymakers, directly and indirectly leading to concrete changes in law and policy around the world.

A report by the Antiquities Coalition and Dr. Brodie, Safeguarding Cultural Heritage in Conflict Zones: A Roadmap for the G20 to Combat the Illicit Trade in Cultural Objects, emphasized that the illicit trade in cultural objects is not a preservation failure, but a failure of governance, law, diplomacy, civil society, and markets.

A lack of political will remains the main obstacle to positive change, but convening world leaders to raise awareness and grow support for coordinated action will help to recognize that antiquities trafficking is not just a threat to our shared history, but to human rights, national economies, and global security.

The Antiquities Coalition thanks the AIA for hosting and sponsoring this vital conversation and looks forward to playing a role in future policy developments to preserve and protect our shared history.