This map seeks to aid efforts to protect heritage by providing a foundation for identifying #CultureUnderThreat in the broader context of terrorist activity in the region.

It shows, sadly, the clear march of destruction by Daesh and its sympathizers and illustrates where deliberate attacks on heritage are occurring and remain threatened.

This phenomenon of heritage threatened by terror groups is not limited to the activities of Daesh.

Cultural sites across the MENA region have been targeted by a variety of terror groups and violent extremist organizations across the Arab world. Although Daesh is capturing the headlines, they are just one of the many groups targeting heritage in the region.

Accompanying text and data review who the perpetrators are and how these activities are being carried out. 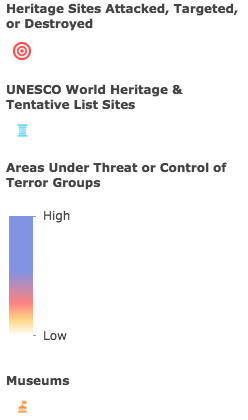 For the purposes of this study, the nations of focus include the member states of the Arab League. In order to illustrate the broader scope of cultural heritage under threat, a complete list of UNESCO World Heritage Listed and Tentative sites, as well as museums in the Arab League nations, has been mapped to display the juxtaposition of major world heritage sites against the reach of terror groups in the MENA region.

These sites cover more than 10,000 years of history, dozens of cultures and religions that represent the birth of civilization and the foundation of society, as we know it today. UNESCO World Heritage sites are only a small fraction of the cultural heritage sites that exist across the MENA region, the University of Oxford estimates there are between 3-5 million archaeological sites in total across the region.

The inclusion of the sites on the UNESCO World Heritage and Tentative Lists gives a glimpse of what is at risk. Locations of UNESCO sites are available to the public whereas the majority of the millions of sites across the region are not publicly known, it is for this reason that we have elected to include only sites whose information has been made publicly available so as not to create a map leading to yet unknown sites and putting heritage further under threat.

The Antiquities Coalition has collected data on the areas under control of terror groups in the MENA region. The AC has composed the Culture Under Threat Map using the ArcGIS mapping system from Esri which allows for the creation of a series of layers to demonstrate the current holdings of terror groups and their potential reach in heritage-rich areas.

Using a heat map to illustrate the geographic extent of terror groups control and recent terror attacks, we are able to glean insight into what could be a potential next target of Daesh, Al Nusra and other groups for plunder or cultural cleansing. A heat map illustrates concentrations of data through a spectrum of colors; in this case blue is used to display the areas of highest concentration while the orange, yellow and white show areas of waning concentration.

In addition to displaying areas under terror control alongside UNESCO sites and museums in Arab League states the Antiquities Coalition, in collaboration with Endangered Archaeology of the Middle East and North Africa (EAMENA), has developed a layer of cultural heritage sites that have been deliberately destroyed or targeted by violent extremist organizations.

This layer, represented by red “target” icons, displays heritage sites that have been deliberately targeted for destruction since the regional destabilization that occurred following the January 2011 Arab Spring. The sites displayed here have been deliberately targeted and attacked by violent extremists or extremist organizations that are non-state actors and do not serve as examples of collateral damage from conflict or war.

Terrorist groups included in this map are only those defined as terrorist groups by the National Counterterrorism Center. The information on primary and secondary funding sources for terror groups was gathered from analysis and comparison of multiple reports from for each funding source included; reports were sources from the US Treasury, US State Department officials, the Council on Foreign Relations, Brookings Institution, RAND, Terrorism Research and Analysis Consortium, Australian National Security, CSIS, the Hague, Forbes and numerous media reports. A complete breakdown can be found below.

This map is interactive and user friendly, it is designed to be explored and clicked throughout and can be accessed using all browsers, computers, tablets, and smartphones.

LAYER: Areas Under Threat or Control of Terror Groups

What it Displays: A heat map of areas that are under the direct control of terrorist groups or threatened by areas they have occupied between January and October 2015. Information from no earlier than 2015 was included due to the continually shifting nature of the MENA conflicts. The terrorist groups included in this map were based on terror groups as defined by the National Counterterrorism Center.

Sources of Information: This map was developed in collaboration with Endangered Archaeology of the Middle East and North Africa (EAMENA) using reports from the ASOR Cultural Heritage Initiatives as well as the Association for the Protection of Syrian Archaeology (APSA). Additionally, reports were sourced from media and social media dating back to January 2011.

What it Displays: A complete mapping of all of the UNESCO World Heritage Listed sites and Tentatively listed sites in the Arab League states.

What it Displays: A mapping of local and national museums dedicated specifically to archaeology, history and/or religion within each nation of focus.

Sources of Information: The 21st Edition of the Museums of the World (2014) as well as the ministries of tourism and/or antiquities for each of the nations addressed.

Help Us Create a Comprehensive Tool

The Antiquities Coalition is seeking to make this map a comprehensive tool that can be used by government organizations and security experts in the fight to protect heritage and combat looting for terrorist financing. We are always happy to collaborate on projects and welcome any comments or suggestions.

Any experts in heritage, counter-terrorism, security or any other relevant areas of study with information they would like to submit for inclusion in the map and the developing report, please reach out to us. Inquiries regarding the map should contact Katie A. Paul at KPaul@theantiquitiescoalition.org.

This map is an ongoing project that is being continually updated and expanded. A complete report of the map development, methodology and analysis will be released in 2016.