“The Exceptional Sale,” In More Ways Than One: The Auction of King Tut

This year, the Fourth of July marks more than the United States’s Independence Day. Across the Atlantic, London-based private auction house Christie’s plans to sell a 3,000 year old bust of King Tutankhamun despite Egypt’s allegations the statue was taken illegally from the country. The auction would mark one of the most high profile sales of an Egyptian antiquity in the last century—a sale tarnished by allegations of looting. 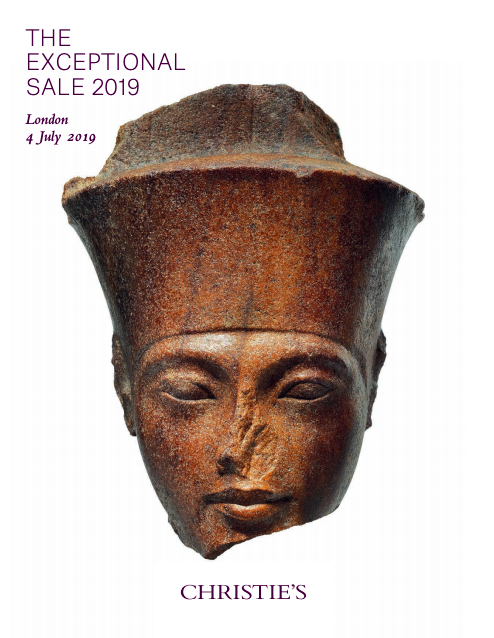 The 14th century BC quartzite bust depicts Tutankhamun as the god Amun, a common stylistic choice meant to visually link the ruler to the gods. Tutankhamun (known colloquially as King Tut) is one of the most well-known pharaohs among the public, partly because he came to the throne at the age of nine. However, it was the 1922 discovery of the young ruler’s intact tomb and subsequent “Tut-mania” that caused the pharaoh’s notoriety to skyrocket.

Christie’s July 4 “Exceptional Sale” marks the first time the bust has appeared on the open market since passing into the Resandro Collection in 1985. The auction house expects the bust to fetch no less than $5 million, an uncommonly high price for the antiquities market.

But the details of how the statue left Egypt in the first place are murky, prompting Egyptian authorities to take a closer look. Zahi Hawass, the former Egyptian Minister of Antiquities, stated that the statue was likely looted from the Karnak Temple complex in Luxor during the 1970s. According to Hawass, “This piece was smuggled out of Egypt and Christie’s cannot prove otherwise. It’s totally Egypt’s right.” A subsequent press statement from the Supreme Council of Antiquities reaffirmed the allegation of looting.

According to the auction house, experts conducted extensive research into the provenance of the statue. Christie’s claims the bust first surfaced in the 1960s as part of a German collection owned by Prinz Wilhelm von Thurn und Taxis and was sold in the early 1970s to Josef Messina, the owner of Galerie Kokorian & Co before being acquired by dealer Heinz Herzer. The bust finally made its way to the Resandro Collection in 1985. If true, the piece would have been out of Egypt before the main international treaty on the antiquities trade, the 1970 UNESCO Convention on the Means of Prohibiting and Preventing the Illicit Import, Export and Transport of Ownership of Cultural Property, came into effect. The 1970 date is important for many ethical codes and museum acquisition policies; however, it is not legally binding. Courts in the United Kingdom and the United States instead look at the date of laws in the country of origin— in this case, Egyptian law—as well as the circumstances of an artifact’s removal.

However, a recent investigation by Live Science suggests that the paper trail Christie’s provides is suspect. According to Wilhelm’s surviving family members, the German collector never owned the sculpture and had no interest in ancient artifacts. Christie’s responded that the family members “were young at the time and do not precisely recall the head but equally they do not, and have not, excluded the possibility either.”

Egypt has initiated a number of proceedings to halt the sale and repatriate the statue. The Prosecutor General Nabil Sadek appealed to the British Public Prosecutor to stop the sale of the head, along with 31 other Egyptian artifacts expected to be auctioned pending proof of “valid ownership certificates.” Officials from the Egyptian embassy in London have written to the UK government asking the statue be returned, and Egypt’s Ministry of Antiquities has appealed to UNESCO and directly to Christie’s to halt the sale. The two governments and the auction house are in close communication, according to a statement from the British Embassy in Cairo. Egypt has threatened legal action if its investigation proves the statue was removed and exported illegally. Even if the investigation finds no illegal behavior, the Ministry of Antiquities has stressed Egypt’s “ethical” right to the statue.

This is not the first time Egypt has tangled with the auction house world. In January, Egypt recovered a stone tablet on sale at an unnamed London auction house that was smuggled out of the country. Egyptian law states that all antiquities found after 1983 on Egyptian soil are the legal property of the state. The law also stipulates that anything found before 1983 is state property unless a valid legal title predating the 1983 law can be proven.

Although the British government recognizes the importance of protecting Egyptian cultural property, calls for the Tutankhamun head to be returned to Egypt have not yet been realized. Christie’s maintains they have the legal right to sell the statue. In a June statement, Christie’s says, “We would not offer for sale any object where there was concern over ownership or export.”

This case highlights the importance of due diligence and thorough provenance research, actions that benefit collectors, auction houses, museums, as well as source nations. At the same time, it also illustrates the nuanced challenges that face both countries of origin like Egypt, as well as market actors like Christie’s.

As of time of publication, the Tutankhamun bust remains poised to go under the hammer in just a few days.

On July 4, 2019, the Tutankhamun bust sold for £4 million at Christie’s. The buyer remains anonymous.