The AC Digs Into: Anti-Theft ‘Fingerprints’ for At-Risk Antiquities

In 2003 and again under Daesh (ISIS) occupation, museum looting decimated renowned Iraqi collections and scattered much of the nation’s priceless heritage on the international black market. To deter such tragic pillage from striking again, an anti-theft technology company, its foundation, and archaeologists teamed up with Iraqi museum professionals to ‘fingerprint’ thousands of artifacts — hopefully making them easier to recover. We discussed the impressive project with Founder and Director of Art Fraud Insights and Senior Advisor at the SmartWater Foundation Colette Loll, Project Principal Investigator and University of Reading Professor Roger Matthews, and SmartWater CEO Phil Cleary. The Iraq SmartWater project is funded by the British Council’s Cultural Protection Fund, in partnership with the Department for Digital, Culture, Media and Sport. 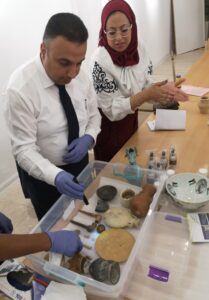 What were the goals of this project? What did the project accomplish?

Prof. Roger Matthews: The project is about enhancing the protection of Iraqi antiquities through the use of SmartWaterⓇ traceable liquid. It involved training on how to apply and record application of the liquid to inorganic material finds within the museum collections in Iraq. We ended up with 273,000 objects marked – about 67,000 in the museum at Sulaimani which is called Slemani Museum and 206,000 in the Iraq Museum, Baghdad.

Who were you training?

RM: We trained a mix from management staff to curators and conservation staff. I think it was 18 in Baghdad and 15 in Sulaimani, and they then passed their training on to a dozen or so additional staff. The local staff really worked so hard to get this done. They put in extra shifts to finish by the deadline. Now they know how to do it, and are willing and able to pass that on to other museums in Iraq or elsewhere.

Did you calculate on a cost-per-object basis what the protection cost?

RM: Yes, it’s a tiny amount. It’s $0.006 per artifact per year, assuming 30-year protection, which is what is guaranteed. We did this whole project for about $195,000 which is relatively modest for a project of this scale.

Colette Loll: It’s important to note that this is a specific SmartWater Heritage™ solution that we’ve developed for artifacts that has a 30-year life, so that means if a museum is looted or something is stolen in five years, ten years, or twenty years, it still retains its forensic signature.

You mention the dedication on the local side. Could you touch on the meaning of this project to Iraq and Iraqis? How was that important in the decision making on your end?

RM: Iraqis are very proud of their heritage, as a general principle — with very good reason, of course. Iraq, ancient Mesopotamia, has so many claims to global firsts in terms of the way we live today — through agriculture, through living in cities, through bureaucracy and so on. Iraqis are very aware of that. So it’s a national issue, as well as a local issue. There are different kinds of traditions and histories in the Kurdish region from Baghdad, for example, and many other sort of micro-narratives going on too, but all sharing in this idea of a national Iraqi past.

I think overall there is a sense of pride and achievement in getting this done. We had an end-of-project workshop where we got everyone to fill in anonymous questionnaires. The comments are really interesting and most of them are along the lines of ‘this is a great thing for us to do for our heritage,’ and ‘it’s an application of a new and exciting technology that others should be looking at to apply.’

“We talk to law enforcement agencies all the time whether it’s the FBI or Department of Homeland Security — you can have your suspicions, but how do you prove that something’s been stolen?”

CL: This is one of the largest implementations we have had, and as the Senior Advisor for the SmartWater Foundation in the U.S., one of the challenges we have had is that funding agencies appear concerned about applying anything onto an artifact. So even though we have done a lot of independent testing to confirm the solution is safe for any inorganic surface, there is still this kind of first-world mentality that is hesitant to place a mark on an object, but when I talk to curators, museum directors or even culture ministers in MENA region countries, they’re often telling me that retention is the first line of defense against theft and looting. A small mark that is invisible to the naked eye is not their primary concern.

PC: Obviously, one of the key issues for SmartWater was to ensure that the application of the forensic solution caused no damage to the priceless artifacts it was being applied to. The SmartWater Foundation funded all the research, development and testing undertaken at the Universities of Reading and Shawnee State, then provided free training for key Iraqis before heavily subsidizing the supply of solution to Iraq. 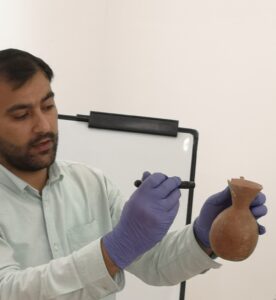 Colette, you have been quoted as saying “forensic markers present a real risk to sellers AND buyers of stolen artifacts.” Can you elaborate on that?

CL: SmartWater has, across many contexts, been used to successfully prosecute theft. That context is important because that is what makes people less likely to want to have an antiquity that could potentially be proven to be stolen and that puts the buyer and the seller both at risk. It puts auction houses at risk. It puts dealers at risk.

We talk to law enforcement agencies all the time whether it’s the FBI or Department of Homeland Security — you can have your suspicions, but how do you prove that something’s been stolen? Well, if an object has a SmartWaterⓇ mark on it, it tells law enforcement that this object belonged to this collection at this date. We can essentially provenance it, so we can prove that the perpetrator is in fact in possession of stolen goods. In the U.S., SmartWaterⓇ is both Frye and Daubert compliant. That means that SmartWater can be introduced as evidence into a criminal court or a civil court and used as prosecutorial evidence and it has been done so successfully. This is really an important law enforcement tool.

I think it is important to mention that SmartWater doesn’t help with looting problems when things are coming out of the ground. What it does help protect are collections that are in archaeological storerooms and museums that are at risk.

PC: To illustrate, there is one case that we know of, a Roman mosaic that is on display in the entrance hall of a fine house of the wealthy owner in the U.S. The law enforcement officers know it’s there, suspect that it has been stolen from the Middle East but also know that there will be insufficient evidence to arrest and prosecute the Possessor. At best, they could seize it but then they know that they’ll become embroiled in a costly and time consuming legal battle, trying to make a case.

That’s all changed with the introduction of SmartWater on artifacts. In the case of the Roman mosaic, all the officers would need to do is locate the forensic signature on the mosaic using a SmartWater ‘black light’ detector, recover a speck as small as the period at the end of this sentence and send it to the lab. There, the scientists will be able to identify which location it came from, the date the solution was applied and the name of the person who applied it, should a statement be required. 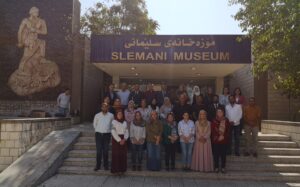 Is this a workable model for another museum that wants to use the solution to protect a collection in a high-risk environment?

RM: Absolutely. I think it is. Colette and I have emailed about a project involving Yemeni antiquities and we’ve wondered about — now that we have a trained cohort of staff in the Middle East — the possibility of putting that training to good use and perhaps having heritage staff from Yemen going to Sulaimani in the Kurdistan region of Iraq and being trained there and then going back and applying SmartWater to their own collections. I’m sure there are several places, certainly in the Middle East, where that model could well apply.

There are also, I should say, other museum collections in Iraq that we haven’t yet done. At the relatively newly-opened museum in Basra in the south of Iraq, and then the Mosul Museum, of course — which suffered terribly under recent occupation by Daesh — there’s still a lot of material there that we could mark.

What are the key takeaways from this project?

CL: This project was a breakthrough in that it was funded by a very credible funding organization, it was successfully implemented, and the museum directors of both museums have been incredibly positive in their feedback and excited about this project. We’re hoping that that enthusiasm can translate to other funding organizations so we can start to cost-effectively protect collections at risk, especially in Yemen where many of the collections we’re looking at are displaced from the museums because of problems with their physical infrastructure. We’ve got museum collections that are incredibly at-risk, since they are dispersed and displaced, that we’d love to protect. I think that having this project as the first major implementation of SmartWater forensic protection will allow us to successfully apply grant funding.

Click here to read the full report on the project.

All images courtesy of the Roger Matthews/Reading University.