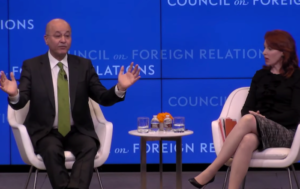 Iraq has seen unbelievable destruction from war and senseless violence for years affecting their citizens, way of life, and cultural history. Still, their government is working to repair the damage that has been done and foster unity among its people as well as protect its historical sites.

On September 27th, the Council on Foreign Relations hosted the President of Iraq, Barham Salih, in a Q&A session where he discussed Iraq’s current state, goals for the future, and how he and his government are working to protect their country’s rich history.

Antiquities Coalition’s Executive Director, Tess Davis, was among attendees and was able to pose a question to President Salih regarding his stance on Iraqi Antiquities.

Question: How do Iraq’s history and culture play a role in the country’s postwar recovery and reconstruction?

“I will admit to the fact that even though I was intellectually enamored with the idea of antiquities and—but somehow never touched me until I visited Nasiriyah about two years ago,” President Salih began. “My wife and I went there, and we went to the marshes—an amazing, amazing place. One of the most wonderful positive stories about Iraq is the restoration of the marshlands, and truly heaven. This is where the garden of Eden was, supposedly, and is unbelievable.” – President Salih

The Iraqi government is working on getting the Pope involved.