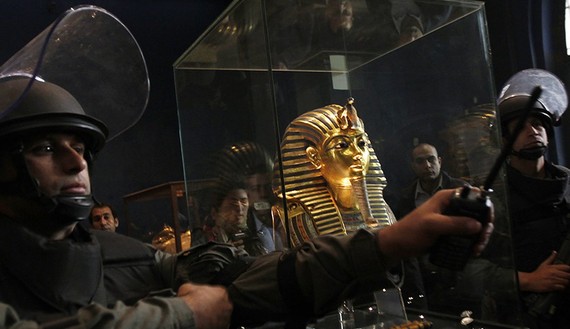 Israel has seized “hundreds and hundreds” of looted Egyptian antiquities smuggled through the Sinai desert but has not returned any of them to the Egyptian government, according to the head of a US-Egyptian organization seeking to help stem the rising plunder of Egypt’s cultural artifacts. 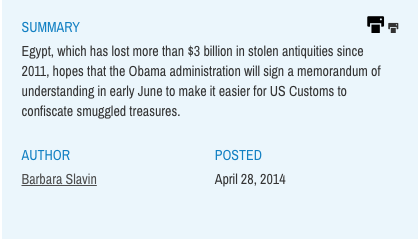 Deborah Lehr, chair of The Antiquities Coalition, an organization of private archaeologists, scholars and others working with the Egyptian Ministry of Antiquities, said April 24 that Israel and Switzerland are hubs where criminals consolidate their loot before trying to sell items to collectors. She said the value of antiquities stolen from Egypt since political unrest erupted there in 2011 amounts to between $3 billion and $6 billion.

Since the overthrow of President Hosni Mubarak in February 2011, the security situation throughout Egypt has deteriorated, depressing income from tourism and motivating some Egyptians to sell their own heritage. The rise of antiquities theft deprives Egypt of future tourist attractions as well as revenue from legitimate sales and loans to museums and individuals. 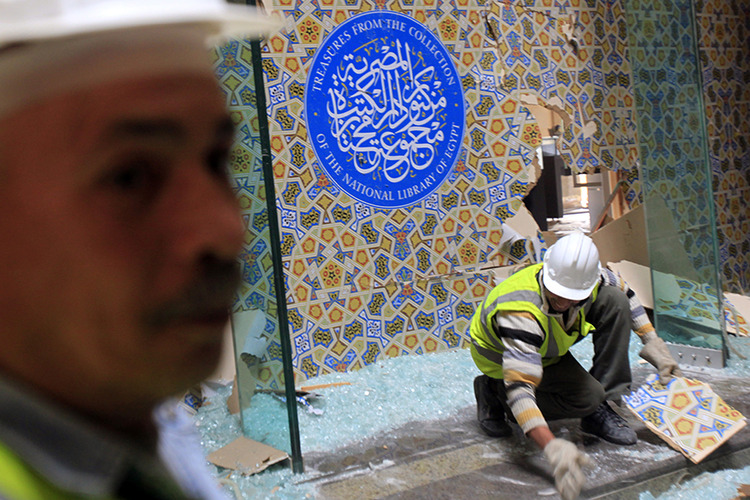 An antiquities restoration worker removes glass at the Egyptian National Library and Archives, which was damaged by a car bomb attack targeting the nearby Cairo Security Directorate on Friday, in downtown Cairo January 26, 2014. Egypt will hold a presidential vote before electing parliament, President Adly Mansour said on Sunday, reneging on a roadmap and increasing the likelihood that army chief General Abdel Fattah al-Sisi will be elected as head of state within months. Parliamentary elections were supposed to happen first under the timetable agreed after the army deposed Islamist President Mohamed Mursi in July following mass protests against his rule. Credit: REUTERS/Amr Abdallah Dalsh (EGYPT – Tags: POLITICS CIVIL UNREST) – RTX17V6M

Lehr, speaking at the Middle East Institute in Washington, said that the Egyptian government has asked the US State Department to approve emergency measures to allow US Customs officials to seize Egyptian artifacts when attempts are made to smuggle them into the United States. A meeting of the State Department’s Cultural Property Advisory Committee is scheduled in Washington for June 2-3 and the board will consider such a memorandum of understanding, she said. Members of the public can attend the opening session of the committee if they register in advance.

Lehr urged the Barack Obama administration to take a leadership role in mobilizing the international community against trafficking in cultural artifacts, which is a growing phenomenon in other Middle Eastern countries undergoing political upheaval such as Syria and Libya and also affects more stable nations, including China. A 1970s-era UNESCO convention on global trafficking in such works is “in deep need of being updated,” she said.

Lehr gave no answer when asked why Israel has not returned seized artifacts to Egypt.

Aaron Sagui, spokesman for the Israeli Embassy in Washington, dismissed Lehr’s allegation as “outlandish. It is not a matter of hundreds of antiquities, but only an issue of slightly over 100, that were brought to Israel in a legal manner.”

Sagui added in an email Monday, “Of course there have been instances of Bedouin groups attempting to smuggle antiquities over the border, but they have been largely stopped by the newly constructed security barrier. The enforcement agencies in Israel have worked tirelessly against smugglers from Sinai, and any items found have been confiscated, as is required by law. At the moment there is a process of clarification underway into a number of antiquities and their return to Egypt. Israel is working in coordination with the Egyptian authorities, and is awaiting the legal rulings in Israel, before it determines how to proceed.”

Egyptian Foreign Minister Nabil Fahmy, queried about the issue by Al-Monitor during a Washington speaking engagement Monday (April 28), said he was not aware of the numbers of confiscated items but was “aware that there are issues with Israelis regarding some antiquities. They’ve been dealt with differently. There are some that frankly remain outstanding.”

Fahmy echoed Lehr’s comment that there is a need to update old laws that permit those who unearth antiquities to claim a certain percentage of what they find. “We’ll do some more work with our friends around the world to try to ensure that antiquities that are abroad are not of a strategic nature,” he said.

Egypt has made progress convincing some foreign auction houses to stop trafficking in its historic objects. Hani Nagi, consul at the Egyptian Embassy in Washington, told Al-Monitor that Egypt succeeded in convincing the online auction house eBay to stop selling stolen Egyptian antiquities last October. The site had been offering items for prices ranging from $100 to $80,000, Nagi said.

The auction house Christie’s has also “started to show some cooperation,” the diplomat said, but Sotheby’s has not. He said the government of Egypt is taking legal action against Sotheby’s for continuing to offer historic items of questionable provenance for sale.

While press attention has focused on the looting of Egyptian institutions during political protests — such as the Malawi museum last summer and the Islamic museum in Cairo earlier this year — Nagi said a major problem was people building illegally and simply scooping up any artifacts found while excavating the sites.

“In some areas, definitely you find something,” he said, given Egypt’s rich history of Pharaonic, Coptic and Islamic civilizations.

Lehr said the items are passed on to middlemen who make the bulk of the profits from the illegal trade. Much of the criminal activity is handled by gangs that also traffic in humans, drugs and guns, she said.

“The US needs a few positives in the US-Egypt relationship,” Lehr said, referring to diplomatic tensions following the military’s ouster of Egypt’s only freely elected president, Mohammed Morsi, last summer and continued US criticism of Egypt for abusing human rights. Relations appear to be warming, however, as the United States anticipates the election to the presidency next month of Field Marshal Abdel Fattah al-Sisi. On April 22, the United States announced that it would resume some of the military aid suspended after the July 2013 coup.

Lehr suggested that culture be part of a regular strategic dialogue that the Obama administration conducts with other nations and that dedicated funding to preserve cultural heritage be a component of US foreign aid. For Egypt, that would mean money to build walls around unprotected sites and to prepare inventories of artifacts at archaeological sites and museums as well as to hire and train more security guards.

More tourism would also be a boon to efforts to safeguard historic areas, she said, as that would give local people an economic incentive to oppose would-be looters.

“One of the big challenges is raising awareness, and hopefully once the new government is in place and there is some sense of stability, tourism will start to increase again,” she said.