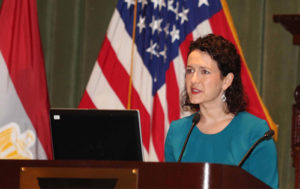 Increased cooperation between the United States and the Arab Republic of Egypt is leading to major successes in the fight against cultural racketeering, the illicit trade in ancient art and artifacts.

That was the message from the Antiquities Coalition’s Executive Director, Tess Davis, as she spoke on September 23 to a full house of senior Egyptian diplomats, representatives from the business community, and other friends of the country.

Her remarks were part of “U.S.–Egypt Relations: Challenges and Opportunities,” a panel discussion hosted by American Pulse at the New York City Bar Association, on the margins of the United Nations General Assembly Meetings. Other speakers included Ambassador Hisham Al-Naqib, Egyptian Consul General, Sherif Kamel, President of the American Chamber of Commerce in Egypt, and Tony Shaffer, a former senior intelligence officer in the U.S. Department of Defense.