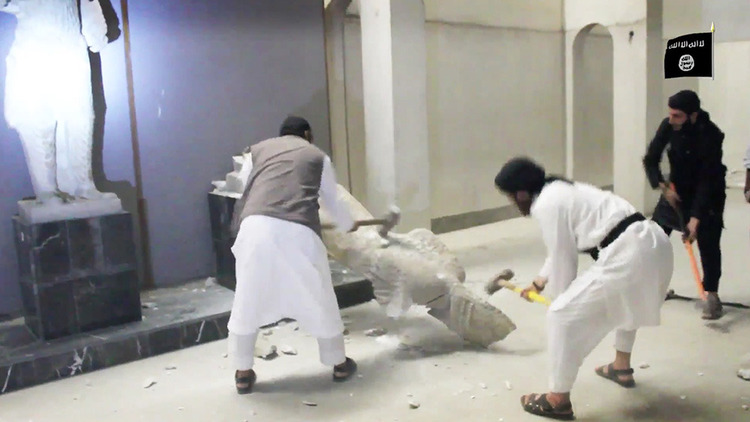 The Whatsapp message appeared on his iPhone: photos of an ancient Mesopotamian vase worth $250,000, part of a highly-valued set that is waiting to be extracted.

The recipient, Amr Al Azm, replied that he was interested. How to proceed? A message from a different account followed. The vase could be smuggled through Lebanon.

Al Azm, an anthropology professor in Ohio, was faking it, as he does when photos of looted antiquities are sent to him in the belief that he is a collector or dealer. He is a detective – – self-appointed — hoping to save some of mankind’s rarest and most vulnerable artifacts by tracking the burgeoning antiquities trade of Islamic State in Iraq and Syria. 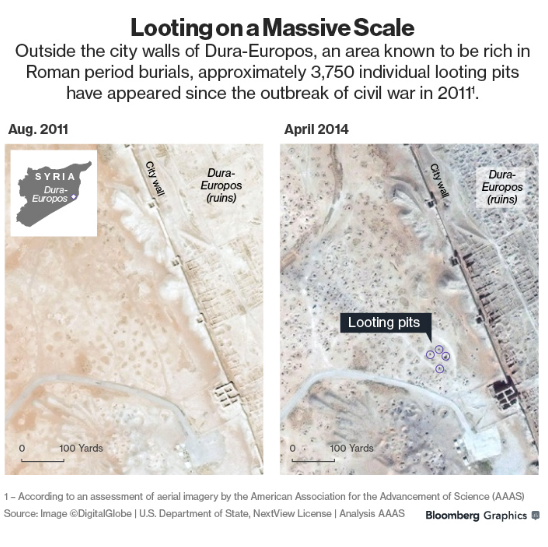 The world went into shock earlier this year after Islamic State released videos of its bearded operatives smashing ancient artworks with sledgehammers and drills. But after U.S.-ledairstrikes on refineries and tankers reduced the group’s $1 million daily oil revenue by nearly two-thirds, the razing gave way to looting for sale via eBay, Facebook and Whatsapp.

The self-declared caliphate is now a growing player in the $3 billion global antiquities market. Willingly or not, buyers are filling the extremists’ coffers.

The group’s fundraising structure has rapidly evolved from collecting a 20 percent tax from diggers and dealers operating on their territory to running their own digs and trades. 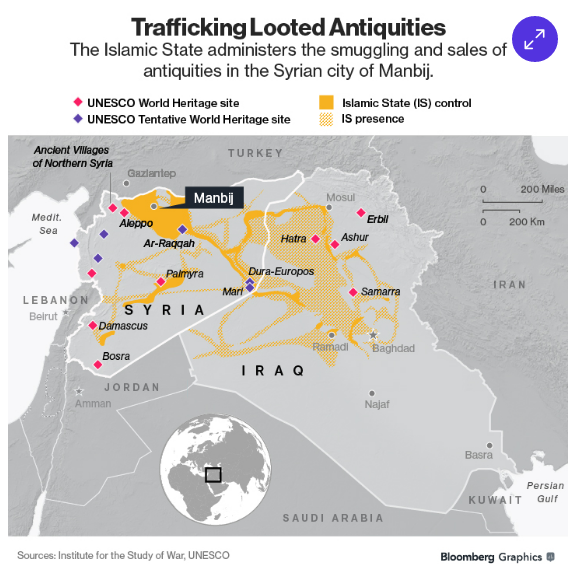 Al Azm, who teaches at Shawnee State University and is chair of the Syrian opposition’s Syrian Heritage Task Force, says that in recent months the group has set up a government branch, chillingly known as the archaeological administration, in the Syrian city of Manbij near the Turkish border, which manages loots and sales.

“They bring in their own trucks, their own bulldozers, hire their own work crews and pay them salaries,” he said.

Islamic State acts as a supplier for a complex chain involving at least five brokers and dealers, said Michael Danti, an adviser to the U.S. State Department on plundered antiquities from Iraq and Syria.

The extremists are closely linked to Turkish crime networks in the border towns of Gaziantep or Akcakale, he said. Once the artifacts are smuggled into Turkey, a broker will cash them for resale to dealers who have pockets deep enough to pay for storage and wait up to 15 years to sell, when law enforcement is less focused on them.

Archaeologists estimate that as much as $300 million worth of antiquities are now flooding the market through Turkey, Lebanon and Jordan as part of Islamic State’s transactions.

Danti, a professor of archeology at Boston University, said he has seen a spike in the number of uploaded photos of cuneiform tablets and antique stamp seals. Some are fake, including Greco-Roman coins manufactured by a Romanian crime ring.

The U.S. International Trade Commission reported that between 2012 and 2013 when Islamic State expanded its reach, American import of declared antiquities from Iraq increased by 672 percent and those from Syria by 133 percent.

James McAndrew, who worked for 27 years for U.S. Customs and Department of Homeland Security, said nonetheless he doesn’t expect major artifacts looted by Islamic State to emerge in New York, London and Geneva for at least a decade.

“Shady dealers sit on smuggled items for years to launder the provenance before trying to sell them for lump sums,” McAndrew said. “There’s enough awareness among major auction houses such as Sotheby’s and Christie’s to avoid handling any antiquity believed to be from Iraq or Syria.

‘‘But the challenge is monitoring private sales, which are driving the global antiquities market,” McAndrew said. “I’m pretty confident those pieces from Iraq and Syria are being sold to locals in the region — wealthy Saudis, Emiratis, Iranians.”

One concern is that the items may end up in freeports, which are tax-free storage spaces at international airports that do not require passage through customs.

“The best way to stop this is by intercepting the items before they end up in the freeports,” said Daniel Brazier of Homeland Security, adding that freeport search warrants are near impossible to obtain.

As part of that effort, the United Nations Security Council adopted a resolution banning the sale of antiquities from Syria and Iraq and earlier this month the U.S. House of Representatives passed legislation making it illegal to sell looted artifacts from Syria.

Some are demanding military action or at least some kind of international protective force. Italian Foreign Minister Paolo Gentiloni proposed creating a “blue helmets of culture” to protect heritage sites when conflicts or disasters break out. Irina Bokova, director-general of Unesco, called for the creation of “protected cultural zones.”

Experts like Danti of Boston University say there is no way to stop this campaign without physical intervention. At the least, he said, borders need to be secured to stop the outflow.

“If we can hold the material inside Syria and Iraq, ISIL can’t get the money for it and it will make it easier for the world to repatriate the antiquities when the conflict ends,” he said, using an alternative name for Islamic State.

Until then academics and art experts are working on an inventory of cultural goods that need to be protected from illicit trafficking, “red lists” collated by the International Council of Museums and the ArtClaim database managed by the London-based Art Recovery International.

Deborah Lehr, chairwoman of the Antiquities Coalition, told UN diplomats on June 4 that “Archaeologists Without Borders” will be created by September to centralize efforts.

“Any terrorist organization or rogue state, even going back to the Nazis, who are looting and trafficking art, are looking for quick cash,” said Marinello. “The ultimate destination for valuable antiquities is the West and people here are more aware now than they were in the 20th century.”

Others are far more pessimistic. Al Azm said re-establishing rule of law is fundamental to combating exploitation of cultural heritage and there is no sign of that.

“The trafficking industry in Iraq and Syria is like what Hollywood is for Los Angeles,” he said. “Just like everyone is an aspiring actor in L.A., everyone in Syria and Iraq is a dealer in some trafficked goods. The people won’t stop hustling until the war ends.”