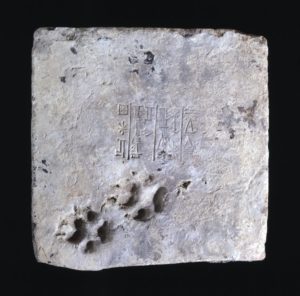 © The Trustees of the British Museum

Right now, dogs are having a bit of a moment in popular culture. Dogs have dedicated social media accounts with massive followings, exclusive merchandise, and some dogs are even Instagram stars with brand sponsorship deals. But an interest in dogs and their various mishaps is by no means an exclusively modern phenomenon. In fact, dogs were domesticated an estimated 12,000 to 15,000 years ago. In honor of National Dog Day, here is a look back at ancient representations of dogs and their role in archaeology today.

Dogs have been getting themselves into sticky situations and sticking their noses—and paws—in places they don’t belong for thousands of years. A 21st century BCE clay brick found at a ziggurat at Ur, in what is now Iraq, has two perfectly preserved paw prints pressed into the side. Another brick from the same period, stamped with the name and titles of the Sumerian king Ur-Nammu, also has two paw prints. Nosy dogs were not confined to Mesopotamia, and Roman Britain had the same issue. Over 2,000 years ago, a dog walked over a Roman clay tile in what is now Leicester, leaving a trail of paw prints behind in the still-wet clay. 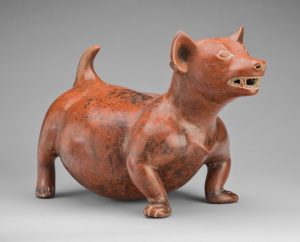 Beyond these accidental decorations, dogs have also been prominently (and intentionally) featured on ancient artifacts for millennia. The earliest depiction of dogs may be cave art found in Saudi Arabia. The scenes show a hunter surrounded by a pack of dogs, with what some experts believe to be either leashes or representations of the bond between the hunter and his dogs. Although there is still some debate on the exact age of the cave art, archaeologist Maria Gaugnin dates the scenes back to sometime between 9,000 and 8,000 BCE. Other interesting depictions of dogs include a 1st or 2nd century CE ceramic figure found in Mexico, a mosaic found in Pompeii with “beware of dog” written beneath the image, and a late 10th century CE jar from China.

Fast forward a few thousand years, and dogs are working to sniff out artifacts, not just decorate them. A recent collaboration between the University of Pennsylvania’s Working Dog Center and Red Arch aims to enlist dogs in the fight against the trafficking of stolen antiquities and cultural property. (See our previous blog post for more information on the K-9 Artifact Finders.) The dogs are being trained to detect the scent of ancient pottery, similarly to how dogs are trained to detect bombs or drugs. Right now, the program is still in Phase I, with dogs learning how to pick out the scent. If the dogs are successfully trained, the program hopes to deploy them to airports and shipping ports to detect smuggled artifacts in crates, luggage, and cargo shipments.

From accidental brick decorators to works of art to anti-smuggling officers, these Very Good Dogs all deserve a rating of 12/10.