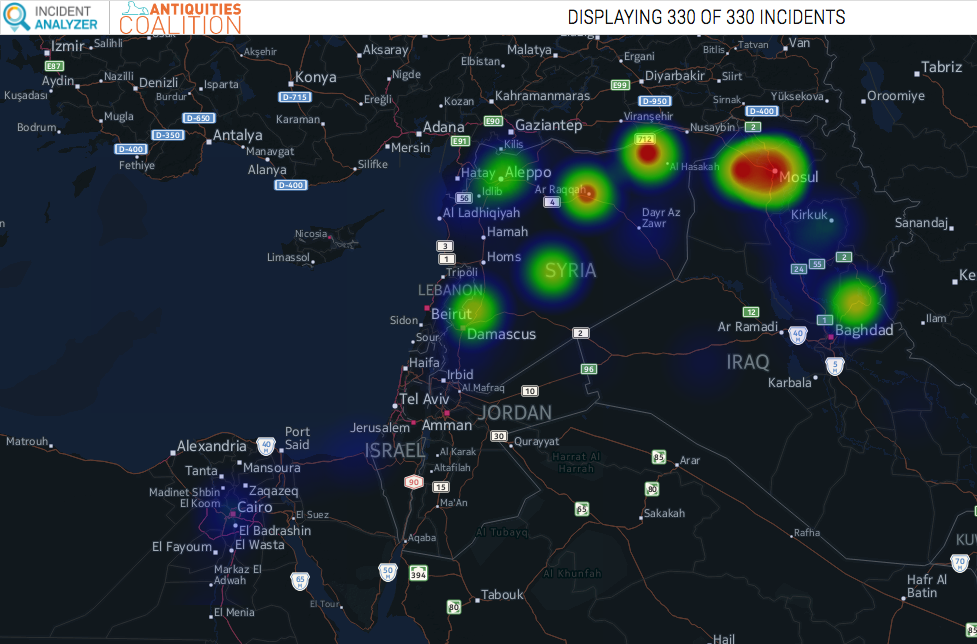 The destruction of cultural heritage has been a frequent casualty of war throughout history. However, the deliberate and systematic destruction of cultural heritage that has taken place across the Middle East and North Africa (MENA) over the past five years is occurring on a scale previously unseen. Groups like Daesh (commonly known as “ISIS”) have turned the demolition and exploitation of heritage into an industry.

The Antiquities Coalition’s interactive #CultureUnderThreat Smart M.App was developed to create a better understanding of heritage crimes throughout of the Middle East. The map allows the viewer to track the progression of heritage crimes over the past five years and contextualize these crimes within a wider framework. For policy-makers, researchers, and law enforcement the data visualization enabled by the map is also an important tool to identify patterns of illicit activity.

The map is the first of its kind to layer information regarding heritage sites, museums, and terrorist organizations operating in control areas under their control in the MENA region. This integrated information allow us to understand the proximity of terror groups to the most prominent cultural heritage sites known in the region: UNESCO World Heritage sites, sites on the Tentative World Heritage List, and museums of archaeology and history.

All of the data used for the map is compiled from open source information. This information comes from monitoring groups like the ASOR Cultural Heritage Initiatives, social media, and international press, including local media in the Middle East. This type of data set was selected in order to avoid creating a road map to sites that may not be known to the public or to groups that would threaten them. The Antiquities Coalition, in collaboration with groups like Endangered Archaeology in the Middle East and North Africa (EAMENA), continually monitors these sources of information to keep the data up to date.

Our goal is to illustrate the path of destruction taken by Daesh and the other violent extremist organizations engaging in cultural cleansing – the deliberate and systematic destruction of a targeted group and their heritage, with the intent of eliminating all traces of a culture’s existence – a recognized precursor to genocide.

Mapping data not only widens the scope of study but also provides new means of examining phenomena. The #CultureUnderThreat Smart M.App is an interactive tool that displays incidents of cultural cleansing with detailed data about this crime of war, shows hot spots of destruction as well incorporating a responsive timeline, providing a new perspective to visualize heritage destruction in the MENA region across territory and time. The interactive timeline tells a story of destruction – one that began with concentrated hot spots in North Africa following the destabilization of the Arab Spring and moved east to Iraq, Syria and later Yemen as instability spread, conflict rose, and violent extremists became increasingly organized and systematic in their destruction. Using the timeline and graphing tools of the map, we have found patterns in the movement of this activity across the broader region. We have also been able to pinpoint which groups engage in these activities on a country-by-country basis. Daesh dominates the destruction in Iraq and Syria, but they are not the only ones committing these crimes. Groups like Al Qaeda are increasing their use of this method of destruction over the past year. The map reveals that Al Qaeda in the Arabian Peninsula (AQAP), Ansar al Sharia, Jabhat al Nusra, Salafist extremists, Shia militants and more have engaged in the systematic deliberate destruction of heritage across the Middle East since 2011.

The data collected for this map spans the time period from the 2011 Arab Spring to present. It is only tracking a subset of existing heritage sites and their destruction, but still the data allows us to see important patterns. During that brief five-year period, 330 sites of cultural or religious significance have been reported as deliberately attacked by terrorist groups or violent extremists in the region. In contrast, the #CultureUnderThreat mapping project first released in January 2016 revealed less than 250 incidents of destruction. Yet sadly, more information continues to become available as terror groups like Daesh lose control of territory in some regions while gaining access in others.

The destruction of heritage was not making major headlines in the years before Daesh but it has become an increasingly frequent topic of focus as the group has made performative destruction one of their trademark tactics. The videos and imagery they produce are difficult to watch, but they also serve as an important source of information for experts seeking to confirm and track destruction where activists on the ground cannot often reach. The map includes any imagery available for sites destroyed in the interactive pop-ups for each location point. This imagery is sourced from media, monitoring organizations, and activists as well as the material distributed by the very groups engaging in the destruction.

As the west continues to run headlines on famous sites and Christian places of worship, the frequent destruction of Islamic sites has been lost in the shuffle. During the post-Arab Spring era, Islamic sites have been destroyed at a significantly higher rate than Christian, ancient, and all other sites combined. Of the heritage sites targeted for cultural cleansing on the #CultureUnderThreat Smart M.App, a staggering 219 – 68% of sites represented – were Islamic.

History is not just being lost, it is being erased and rewritten by violent extremists seeking to eliminate the cultures and peoples who have inhabited this diverse region for millennia. With cultural cleansing as a known precursor to genocide, future efforts to track patterns of deliberate destruction like those found in the #CultureUnderThreat Smart M.App may help provide clues to identifying populations at imminent risk of ethnic cleansing. Tools like this are a small but important step in combatting the destruction of heritage in the future.

Katie A. Paul is an anthropologist and archaeologist focusing in the Middle East. She is chief of staff at the Antiquities Coalition.