Tourists pose for a souvenir photograph in front of the Egyptian Museum in Cairo on May 10. (Photo: Amel Pain, epa)

CAIRO — Tucked in a corner of the Egyptian Museum, a gilded statue of King Tutankhamen is badly broken, its arm detached and a mound of gold flakes chipped off its torso.

At least the statue — one of thousands of objects looted from museums and archaeological sites during more than three years of political unrest —made it back here.

Antiquities thefts spiked in the wake of the revolt in 2011 that ousted Hosni Mubarakand led to a security breakdown. Thieves robbed museums and archaeological sites, at times bulldozing land and bombing structures on top with dynamite, said Egyptian archaeologist Monica Hanna.

“They go and completely destroy the sites in search of treasures,” she said, adding damage was fast, mechanical and done by people trying to get rich quickly.

On display once again in a glass case, the small statue is a symbol of recent gains made by Egyptian authorities to reclaim and protect the nation’s prized antiquities.

The task to recover such objects remains difficult. About $3 billion worth of antiquities have been looted since 2011, according to the International Coalition to Protect Egyptian Antiquities, a U.S.-based initiative that partnered with Egypt’s Antiquities Ministry in March.

“The problem is still not solved by any stretch of the imagination,” said Salima Ikram, professor of Egyptology at the American University in Cairo. “There is still a lot of looting continuing.”

Last month, authorities in the southern Egyptian city of Minya arrested two people accused of having more than 600 artifacts in their possession, state news agency MENA reported. That comes after a leader of a looting gang was arrested in Abu Sir and dozens of antiquities were found hidden in his oven in late June, according toAhram Online, an English-language news website. Two men in June were caught with a mummy in their possession, the Cairo Post reported.

Though cases involving looting of artifacts gain media attention, a larger problem is undocumented objects moved out of Egypt after illicit digging, which has increased 500% to 1,000% at major archaeological sites since 2011, according to the Antiquities Coalition.

Those items are smuggled out of the country through export shipments overseas, packages in the mail or underground tunnels, said Ali Ahmed, director of the repatriation department at Egypt’s Antiquities Ministry.

That’s where Ahmed and his team come into play, scouring websites of auction houses such as Christie’s to find objects Egypt may be able to get back with the help of its foreign ministries.

A new exhibit at the Egyptian Museum where the broken statue of King Tut was displayed highlights objects repatriated from Germany, New Zealand, England, Belgium and elsewhere since 2011.

Although objects were repatriated over the past three years, there was a concerted effort involving embassies to reclaim looted items taken outside Egypt only after military-backed authorities took charge last summer, said Deborah Lehr, chairman of the Antiquities Coalition, which oversees the International Coalition to Protect Egyptian Antiquities.

“We do think the Egyptian government has taken very good steps,” Lehr said.

One of those steps was former antiquities minister Mohamed Ibrahim’s appeal to Americans — in a Washington Post opinion piece last fall — not to purchase Egyptian antiquities, Lehr said. Her organization noted an increase in police raids to reclaim objects and an attempt to put police back at famous archaeological sites. She said the Antiquities Coalition’s efforts to help protect Egypt’s heritage have been supported by new Minister Mamdouh El-Damaty, appointed in June.

Security at museums and storehouses has improved, thanks in part to a general boost in political stability and security by authorities seeking to fight militant violence and political unrest, leading to a decrease in looting, Hanna said.

“There is more security, so no one is attempting to attack any museums or storehouses,” she said, but land grabbing and raiding of archaeology sites continue.

Authorities paid even greater attention to the problem after more than 1,000 objects were stolen from Egypt’s Malawi National Museum in Minya in August 2013, Ikram said.

“The government doubly started to show some interest, respond and be a bit more engaged given the damage being done to antiquities sites,” she said. “With an increase in security at various sites, it is getting better.” 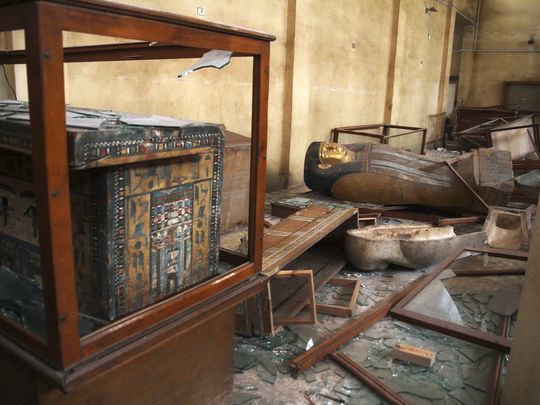 Damaged pharaonic objects lie on the floor and in broken cases in the Malawi Antiquities Museum on Aug. 17, 2013, after it was ransacked and looted. (Photo: Roger Anis, AP)