Unrest and civil war in the Middle East has brought the issue of blood antiquities into the limelight. Buyers need to know precisely their prized purchases’ provenance.

At shops and auction houses in Asia, online, and virtually everywhere else with an appreciate for the fine arts and a density of collectors, antiquities have emerged as a coveted asset class in an increasingly volatile global economy.

But while the almost US$54 billion global market for ancient statues, sculptures, jewelry, coins, art and other rare artefacts is gaining cachet among high-net-worth investors seeking to diversify their portfolios, that market is also fraught with an unexpected and ignoble risk: enabling terrorism. Investing in antiquities has always been complicated because of the difficulty of reliably determining provenance. That process has become more opaque recently as political instability in the Middle East has allowed a black market in highly sought after ancient items from the region to flourish.

Looting has been occurring since there has been treasure worth buying. No country with a past worth protecting is spared, including China.  Yet looting is occurring at an unprecedented rate in the Middle East today.

Exact numbers are tough to come by, but the trend is definitely upward.  Since the 2011 Revolution in Egypt, some US$3 billion in losses in this ancient land have been attributed to “cultural racketeering” – the systemic looting and trafficking of heritage.  This figure does not include the intentional destruction and trafficking of antiquities in the “cradle of civilization,” which spans 10,000 years of human history and is under the partial control of the Islamic State of Iraq and Syria (ISIS), where the losses are even higher.

In these horrific acts to eradicate shared history, ISIS has been intentionally targeting symbols that define Western culture, and striking at the heart of economies that relay on cultural tourism.

We witnessed this with attacks at the Great Pyramids in Egypt; the assassination of tourists at the Bardo Museum in Tunisia; and the raiding, pillaging and razing of historic libraries, artefacts and ancient structures in Mali, Yemen, and Libya. But nowhere has culture been a greater victim than in Syria and Iraq, where Palmyra, Mosul, Nineveh and hundreds of other historically important sites in areas have been plundered and destroyed by ISIS. Videos that emerged last year of ISIS fighters taking sledgehammers to ancient artworks have fueled the group’s campaign of intimidation and fear.

While the so-called Islamic State’s disdain for history and culture has been a valuable tool in its efforts to break the resolve of its enemies, a more tangible goal is profit – profits which are used to fund unspeakable atrocities.

ISIS and its affiliates steal precious antiquities from national museums, storage depots, and private collections. ISIS promotes illegal digging for new treasure in the territories under its control, and while all historic context of the article is lost, ISIS then profits – handsomely – from their same around the world.

Antiquities trafficking is an important source of revenue for ISIS.  But these terrorists should not be able to profit from unwitting investors, collectors, auction houses, decorators, and other antiquities enthusiasts who are inadvertently underwriting its savage and evil agenda, paying for the very weapons that that maim and behead innocent civilians. China, now the second largest market in the world for art and antiquities after the United States, should not become a source of financing for blood antiquities. And it is not just terrorists who are trafficking in these illicit antiquities. Organized criminal gangs operate global networks and they also profit from wide scale and systematic looting.

Just one Syrian statue, can fetch as much as US$1 million on the international antiquities market. That’s enough to fund thousands of weapons and ammunition, including more than 11,600 AK-47s and 2.5 million bullets, or 1,250 rocket launchers and 5,000 mortars. 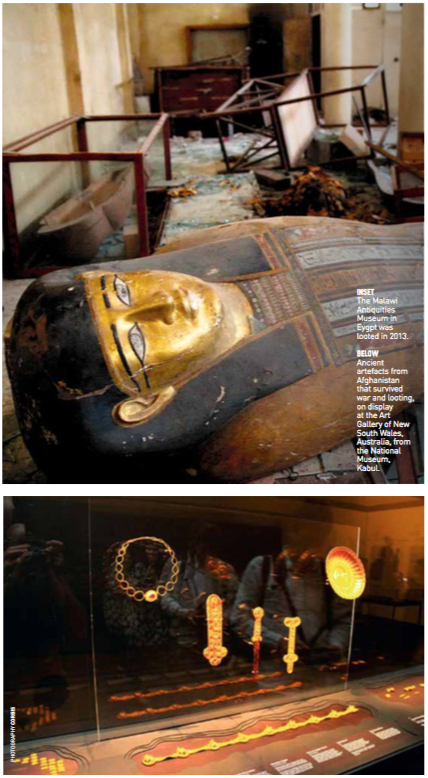 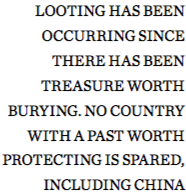 Confronted with so many barbarities, many in the international community regard diverting limited financial and fighting resources to protect antiquities as a choice between saving lives and saving stones. The stark connection between the antiquities black market and terrorist funding, however, shows that there is not such a clear distinction between thee two options.

So what can be done? There are three possible options. First, international support for an embargo on the import of “blood antiquities” would be a meaningful start. All nations should implement United Nations Security Council Resolution 2199, which prohibits trade in cultural property from Iraq and Syria. Second, border police and customs agents need to be trained on what to look for and how to prevent looted items from leaving the country or entering those with large antiquities markets. And dealers that peddle in blood antiquities should be prosecuted, even for potentially for supporting terrorism, as the FBI has said it will do in the United States.

Finally, antiquities collectors can simply stop buying blood antiquities. If the most sophisticated auction houses and museums in the world are unable to reliably verify provenance, how can an individual be sure that their antiquity was not the result of crime and conflict?  If there is an object too spectacular to resist, do your homework.  Valuable antiquities leave a long paper trail, from insurance appraisals to import declarations.  At the same time, be wary of forgeries.

We haven’t a moment to lose. Stopping this illicit flow of goods and saving cultural heritage, especially in a time of crisis, is an essential part of our common global security, a means to eliminate an important revenue stream for terrorist organizations and other nefarious groups. It is also about protecting the world’s cultural heritage.

PDF of the article here