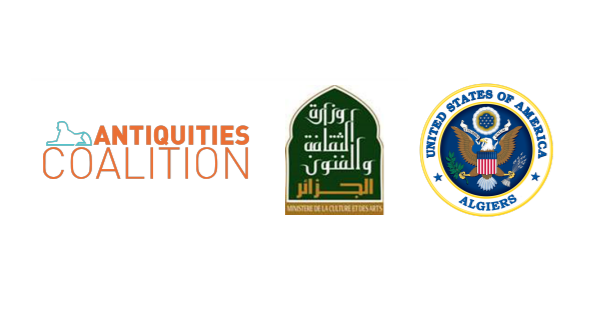 Algerian Minister of Culture and Arts Malika Bendouda joined Antiquities Coalition Co-founder and Project Director Peter Herdrich on March 3 in welcoming participants to “Digitization Strategy at the National Level,” the first of a series of webinars on the regional digitization of cultural heritage collections produced through the collaboration of the Antiquities Coalition and the Algerian Ministry of Culture and Arts. The webinar series is sponsored by the U.S. Embassy in Algiers, and Adam Sigelman of the Embassy served as session moderator.

Following the webinar, the Algerian Ministry of Culture and Arts issued a press release summarizing Bendouda’s opening message, including her praise for Herdrich and the Antiquities Coalition.

The original press release, written in Arabic, can be found here on the Algerian Ministry of Culture and Art’s Facebook page. The U.S. Embassy in Algiers has helpfully provided an English translation, featured below:

On Wednesday, the Minister of Culture and Arts, Mrs. Malika Bin Douda, launched the first visual conference on digitization, as part of a series of virtual conferences on “Regional Digitization of Cultural Heritage Collections”.

The Minister saluted the efforts of the participants from neighboring countries (Tunisia, Morocco, Libya and Mauritania), as well as Mr. Peter Herdrich, founder of the Antiquities Coalition, director of the cultural heritage preservation project, and his team.

The Minister also praised the efforts of Mr. Adam Sigelman, in charge of cultural programs at the American Embassy in Algiers.

The Minister saluted the support of the U.S. Embassy Algiers and its role in strengthening bilateral cooperation between the two countries in several strategic projects and their impact in helping to widen the cooperation of the two other fields.

In the same context, the Minister praised the role played by the officers in the U.S. Embassy Algiers, in promoting Algerian culture and heritage through social media, especially, Adam Sigelman, Salman Haji and Khaled Wulfsberg.

The Minister stressed that Algeria is a pivotal country in the North African region that has its own rare collection of books and manuscripts, whether from the region or from the world.

The Minister affirmed that throughout history the manuscript and books have received the necessary importance and care, whether through codification and authorship, or through preservation and preservation, even by traditional methods and mechanisms, in order to perpetuate knowledge and transfer work and thought to future generations.

The Minister pointed out that the culture and arts sector has recently made several reforms in order to promote and value culture, especially through the use of information and communication technologies in cultural performance, in an effort to open up to this world. She stated that this could be a solid bridge for the cultural sector to enter the world of cultural economy and invest in it on the one hand. As the best way to take the new generation into interest in culture and consolidating national identity, on the other hand.

For more information about the Antiquities Coalition’s key role in developing this webinar series, read our blog post here.