AC in the News: How Indian Activist Groups Work to Recover Missing and Stolen Antiquities 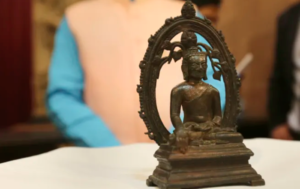 The idea of who owns cultural property has long been a heated debate, leading to a constant uphill battle to end illicit trades.

However, groups like India Pride Project (IPP) and The Antiquities Coalition have been working to have these precious antiquities returned to their rightful homelands.

“Our research shows that well over $700 million worth of Indian art and antiquities entered the U.S. just in declared imports over the last decade,” AC Executive Director, Tess Davis, tells Angel Martínez Cantera of The Diplomat. And that may be a modest estimate!

Smugglers like Subhash Kapoor, who was a known criminal art dealer, profited greatly on stolen antiquities.

Davis explained that one of the most frustrating pieces of the puzzle in returning the stolen antiquities is that “just about every foreign museum with an Indian art collection purchased pieces from this smuggler, and some continued to do so even after the true nature of his business was revealed.”

To read the full article from The Diplomat, and to learn more about what is being done to return these antiquities, click here.