Time and time again, the Antiquities Coalition has reported on antiquities that have been looted from historic sites, smuggled out of their home countries by organized crime groups, and sold to the highest bidders, with the profits being used to fund violent crime and conflict all over the world.

We’ve seen enough—and so has INTERPOL. In May 2021, INTERPOL expanded on its Stolen Works of Art Database by launching the ID-Art app, now available to the general public for free through major app stores.

The Antiquities Coalition spoke with Corrado Catesi, coordinator of the INTERPOL’s Works of Art Unit, to learn about what this app can do—and why we need it now more than ever. 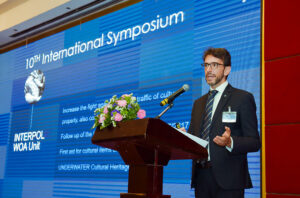 The three main features of ID-Art are:

Searches among the 50,000 items currently registered in INTERPOL’s Stolen Works of Art database can be carried out by taking or uploading a photo, or by entering search criteria manually.

Users could create an inventory as per international standards known as ‘Object ID’, capture images and record features of beloved works of art to help keep track of collections. In the event of a theft, these private records can be provided to law enforcement, greatly enhancing the chances of recovery.

The application also allows users to report sites at risk (whether they are historical, archaeological or underwater) by recording the geographical location, a detailed description and images in order to capture the condition of the site. The resulting “site cards” can then be used as evidence or basis for reconstruction if ever the site is looted or destroyed. ID-Art is freely available on the Apple and Android Stores.

Is looting and trafficking of cultural heritage materials a problem for every country around the world?

Political instability and armed conflicts in some areas of the world create a profitable environment for individual criminals and organized groups willing to destroy and remove an essential part of the heritage of its people. Furthermore, the illicit traffic of cultural property from conflict zones, particularly from the Middle East, has been linked on several occasions to the financing of terrorist activities. The latest example of this international awareness is the Council of the European Union conclusions on Preventing and Countering Terrorism in June 2020, which underlines how terrorist groups generates income from these crimes, while also encouraging member countries to cooperate with INTERPOL and contribute to its tools.

Another fundamental aspect of this complex crime is the active participation of organized crime groups (OCGs). Their involvement constitutes a huge threat to public security, as OCGs are oftentimes responsible for stealing, looting, moving and selling illicitly acquired objects. Cultural property is, in the majority of the cases, illicitly exported from one country to the other thanks to consolidated criminal networks and the work of middlemen. In this context, numerous reports produced by INTERPOL, as well as operational information the Organization receives on a daily basis, overwhelmingly confirm the global and transnational nature of this crime, as it affects every country on the planet as either source, transit or destination area.

Who can use ID-Art? What are scenarios in which ID-Art should be used? Who would you like to see using ID-Art?

ID-Art is open to the public, and it has been created with both law enforcement and the general public’s needs in mind. ID-Art should be used to check in real-time if an object has been reported as stolen or not in the INTERPOL’s database to fulfill the due diligence obligations of buyers before acquiring cultural items. It could also be used to create inventories of collectors’ own objects, to keep safe all the necessary information of their objects and to report to the police in case of theft. The inventory function could also be used by police and customs officers to share and/or request more information on seized objects. Lastly, the ‘site card’ function could be used to report sites at risk (whether they are historical, archaeological or underwater) by recording the geographical location, a detailed description and images in order to capture the condition of the site.

How will ID-Art help fight the illicit trade in art and antiquities? How are you pushing the boundaries of policing heritage materials with ID-Art?

ID-Art is a revolutionary tool in the fight against the illicit traffic of cultural property, as it allows everyone, both police and the general public, to quickly carry out searches on the INTERPOL’s database. This in turn will translate into more frequent and precise searches carried out on the Database, and more reports of stolen objects to law enforcement authorities.

Is it possible for users to browse your inventory of stolen materials?

Yes, the INTERPOL Stolen Works of Art Database has been public since 2009—users can simply request a username and password from the INTERPOL public website. Nowadays, ID-Art allows anyone, without any kind of username, to directly access the more than 51,000 objects in the Database.

Why should museums and private collectors inventory their collections using the app?

Keeping detailed information and reports of cultural heritage is an essential step in the fight against the illicit traffic of cultural property. The search and recovery of stolen objects without the necessary information (first of all, good quality photos) are extremely difficult and complex. ID-Art allows anyone to quickly create inventories of their collections, which could be consequently shared with law enforcement agencies in case of theft.

What recommendation would you make to help strengthen the international fight against cultural racketeering?

Although the illicit trade in cultural property is considered one of the most profitable activities for criminals, lack of awareness and attention at the national and international level remain a huge issue. For this reason, INTERPOL spends significant effort in encouraging all its member countries to create a specialized police unit, as well as a specialized database.

These recommendations have also been proposed by other major international organizations, such as the UNSC in its resolution 2347/2017; the UNGA resolution 73/130/2018; the 1970 UNESCO Convention; and the special recommendations produced by INTERPOL, UNESCO, UNODC, Italy and Jordan in 2016.

The first huge advantage is the improved ability to investigate cases linked to cultural heritage, while identifying and dismantling organized crime groups and an overall increased capacity to recover stolen objects of art. Establishing such units would result in better coordination between law enforcement at both the national and international level, an improved ability in determining links between criminal networks, and a greater ability to trace movements of heritage and tackle forgery of art. Administrative controls could also be carried out by specialized officers, as well as patrols of heritage sites to tackle the phenomenon of illicit excavations. Lastly, these units could carry out security checks on museums and religious buildings to ensure the correct functioning of alarms and other security measures.

Yet, specialized units alone would still not suffice to equip a national law enforcement agency to the best of its possibilities. National databases solely dedicated to keep track of stolen objects, forgeries and other important information are also fundamental in tracking and identifying artworks. Stolen objects can be out of the market for an unpredictable amount of time—often years, before reappearing in the market. Recording this information on specialized databases allows police officers to keep track and maintain essential records for as long as necessary. Recording artworks in generic databases for stolen property, as many countries do, actually hinders investigations and efforts put in place by police forces.

INTERPOL strongly encourages law enforcement agencies and the general public to also take advantage of its tools—such as the aforementioned INTERPOL Stolen Works of Art Database and mobile application ID-Art, which are both open to the public.

What is your favorite heritage object that you’ve been involved in identifying and repatriating to its home?

There is not a specific favorite heritage object. Indeed, it is always an honor to contribute in all possible restitutions of our common cultural identity.